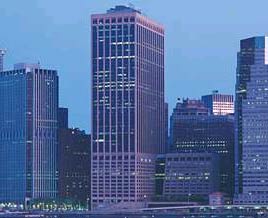 If you were checking the Gothamist Newsmap yesterday, you may have noticed that there was a possible Hazmat situation at 55 Water Street in lower Manhattan. Apparently someone fell ill when opening a letter that contained an unknown substance and then other people were sickened as well!

According to the Post, the letter was sent to Standard & Poor's. The envelope was not addressed, and a worker tried to smell the contents (!). Though other people "began to feel nauseated," authorities believe that the letter was a hoax. Which begs the question: What non-dangerous powders nauseate people or can the power of suggestion make people ill?

Here's information from CNN on the 2001 anthrax scare. During the summer, some threats were made to Goldman Sachs, though it's unclear how credible they are. And 55 Water Street is also were peregrine falcons have been known to nest - the building's website has a section devoted to them.