A jewelry store whose clientele includes Selena Gomez, Kate Winslet and Beyonce was robbed yesterday, police say. The NYPD released a video of the suspect who allegedly robbed the Upper East Side store, Margo Manhattan. The owner also added that her employee was choked by the man.

According to the police, it happened at 1:50 p.m. on Friday. A man walked into the store at 1202 Madison Avenue (near 88th Street) and asked to view some jewelry. A 53-year-old female employee began to help him, but then police say, "he grabbed her by the neck and forced her into the back room where he tied her up. The suspect then removed a key from the victim to open a display case and removed jewelry. He returned to the back room where he removed additional items fled the location with approximately $54,000 worth of jewelry."

The owner, Margo Manhattan, told the Daily News that her employee was the only one there and had buzzed the man in: "She thought he was maybe a rap star." But the employee was viciously attacked—Manhattan says that the man had a stun gun: "She came to a point where she saw her life in front of her. He was really forceful. He choked her. He said, ‘I’m going to kill you.’" 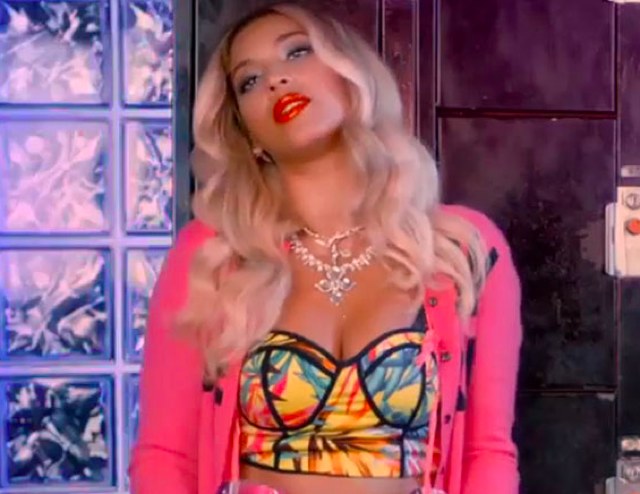 Manhattan's jewelry has been worn by numerous celebrities and one stunning necklace was worn by Beyonce in her video for "Blow." Of the stolen items, the News says there was "an 18-karat white gold bracelet with pavé diamonds worth $10,000. Also nabbed were a $45,000 necklace, a $7,500 bracelet, a $4,500 bracelet and a $2,100 bracelet in a style worn by Beyoncé." Manhattan said she doesn't care about the jewelry, "I’d rather them get the jewelry than have them hurt anyone. Their safety is more important. I can replace the jewelry but I can’t replace their life."

The suspect is described as wearing a black Brooklyn Nets caps, blue jeans, black T-shirt, black belt with a silver colored buckle and a beaded silver chain. Anyone with information in regards to this incident is asked to call the NYPD's Crime Stoppers Hotline at 800-577-TIPS. The public can also submit their tips by logging onto the Crime Stoppers Website at WWW.NYPDCRIMESTOPPERS.COM or texting their tips to 274637(CRIMES) then enter TIP577.

#beyoncé
#grand larceny
#Jewelry
#Margo Manhattan
#robbery
#upper east side
Do you know the scoop? Comment below or Send us a Tip