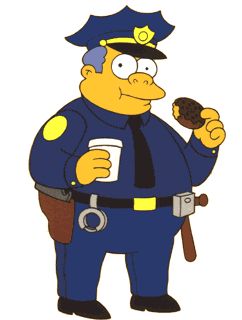 When retired cop Paul Soto joined the force in 1993, he weighed a svelte 250 pounds. He now weighs over 500 pounds and is living off disability payments since maladies like narcolepsy, hypertension and, yes, morbid obesity, made his desk job unbearable. In 2006, he left the force, living off benefits which equal half his old paycheck, tax-free.

But had his disability resulted from activity in the line of duty, Soto would be pulling in three-fourths his salary. And that’s why he’s in the news today.

A state Supreme Court judge rejected Soto’s appeal for the increase in pension, which he claimed he’s due because he hurt his knee in 2005 when, while on duty, he tripped on a wooden pallet outside a doctor’s office. In her ruling, Judge Judith Gische agreed Soto was “morbidly obese” and disabled, but denied him the benefit hike because the cop was already assigned to desk duty when he tripped on the pallet. The judge concluded the incident left him no less capable of sitting at his desk and shuffling papers around; the pension board decision Soto was appealing blamed his knee injury on his “excessive weight.”

So Soto will have to settle for a trough half-full and a few days of embarrassing publicity, which the Post article was more than happy to provide:

A former colleague at the 6th Precinct said Soto's gun belt was an incredible 6 feet long, and his bosses would order him to take walks around the stationhouse for his own good. They would also have other officers shadow him to make sure he didn't pick up food along the way, he said.

A commenter on police chat board NYPD Rant went further:

Every day this fat turd gets paid is a slap in the face to the hard working cops whose backs he's been riding for his whole disgraceful "career" ( for lack of a better word)... When ESU, FDNY, EMS, and large game managers from the Bronx Zoo have to cut a giant hole in the side of his wood-framed cave, wearing full hazmat suits, to extricate his fetid mazz from the dizgustin lair within, he will prolly sue for "embarrassment and mental anguish"...That his overtaxed, lard encased heart is still beating at all, is God laughing at us, lord help us all.