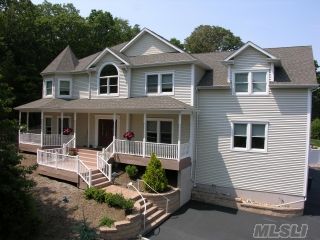 Seems like 50 Cent doesn't want to put another dime into his ex-girlfriend and their son's living situation. Fitty (real name Curtis Jackson) allegedly bought the $1.5 million Long Island home (pictured) for Shaniqua Tompkins and their 10-year-old son, but now the rapper is sending them to the streets.

Tompkins filed a lawsuit in Manhattan accusing her ex of evicting her from the home, claiming "breach of contract." When closing on the house last year, sources reported that she wanted half of it in her name, but the deed only includes his. Does he have grounds to kick her out? A judge has obliged his wish, leaving the unemployed Tompkins to fend for herself. Sort of. The rapper's lawyer, Brett Kimmel, "said his client is paying Tompkins $6,700 a month, and that includes cash for her to find a new place to live for her and Marquise."

Not a bad deal for someone who had her new boyfriend living under Fitty's roof! That's right, the rapper claimed that Tompkins had invited her new beau and some other friends to live in the house that he was paying for.

As for Fitty, the Queens native sure likes rockin' the suburbs, last year he invited the world into his Farmington, Connecticut home (which he put on the market) -- complete with 19 bedrooms, 37 bathrooms and a single strip club room.