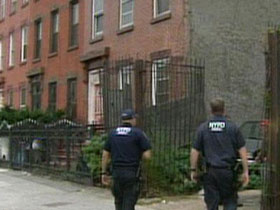 A 16-year-old boy was shot in the head after looking out of the window of his Bushwick home on Cooper Street. The police believe Tavin Alves Clarke looked outside after hearing gunfire and was shot between 2-3AM. He wasn't found until 5AM, when his 5-year-old brother woke up and found him bleeding and "slumped by the third-floor window." The child ran to his mother and sister for helping crying, "My brother was bleeding!"

The Daily News reports that while hunting for the shooter, the police arrested seven people, "although most were for unrelated outstanding warrants." A witness told the police she heard an argument about money and the police are also reviewing surveillance video.

Clarke is in critical condition at Kings County Hospital. He is under police guard. His sister told the Post that her brother, who is a ninth grader at Franklin K. Lane High School and has worked as a volunteer lifeguard, is a "cool, laid-back person. He doesn't mess with anybody. He does his school work." And Clarke's mother told the News they were planning on moving to a better area - shootings are up 22% in their neighborhood.