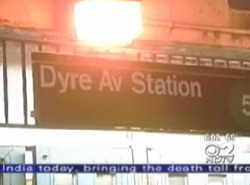 A 19-year-old man was killed early this morning while returning home from a family picnic with friends. WCBS reports that two groups of men began fighting on the 5 train between 233rd St. and 180th St. and Dyre Ave. in the Bronx, when one of the combatants pulled a gun and started shooting. An initial account from a witness told WCBS that someone simply walked onto the 5 train and shot Rayquan Story in the head, but followup interviews indicate that Story and his friends argued with another group at the picnic and were followed onto the subway.

The hail of gunfire killed Story, who was pronounced dead on the scene, and three of his friends are being treated for gunshot wounds at Our Lady of Mercy Hospital, where they are in stable condition. Police have some leads from family members who were at the picnic and are looking for a young male, who is obviously armed and dangerous.

#bronx
#crime
#friends
#gun
#hail
#hospital
#Our Lady
#police
#shooting
#subway
#train
#wcbs
Do you know the scoop? Comment below or Send us a Tip
A new Gothamist is coming! We’ve moved comments over to our beta site. Click here to join the conversation and get a preview of our new website.