What if you could take one train all the way from Fulton Street to LaGuardia Airport? Or if the Second Avenue Subway didn't just cover the east side of Manhattan (already a far-off promise) but also branched into Queens and south Brooklyn? The MTA may be in no position to contemplate such radical projects, as it's preoccupied with repairing debilitated tunnels and making good on some of its less outlandish promises, but that hasn't stopped cartographer Andrew Lynch from envisioning a wildly fantastic future for the city's subway system. This isn't Lynch's first foray into subway futurism: in previous projects, he's cooked up the notion of a Manhattan-bound G train and made several suggestions for improved subway service in Queens.

From extending the Second Avenue Subway across 125th street to connect with the 1, to lengthening the F, M, and 7 lines to serve the current subway desert that is northeastern Queens, there's a lot to look at here. Below, the five most intriguing suggestions Lynch has offered to help the New York City subway system better serve its passengers. Feast your eyes, and then cry them out because it's unlikely even one of these ideas will be realized in your lifetime. 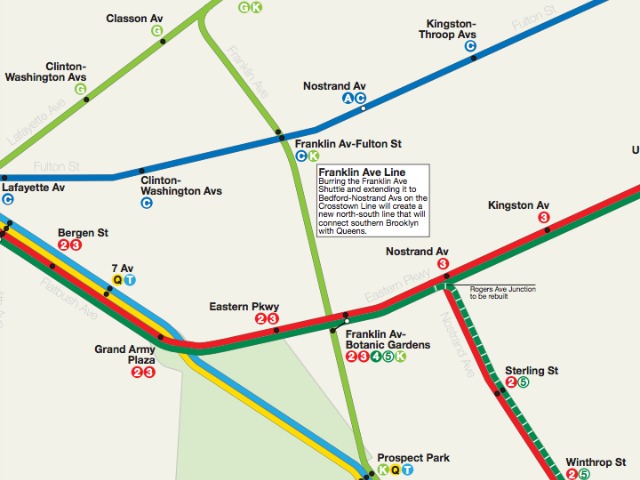 Lynch's plan would not only restore G service to Forest Hills, but also add another train to the line: the K train. The K would effectively replace the Franklin Avenue Shuttle and extend it up to Bedford-Nostrand Avenues. Though G train service would still terminate at Church Avenue in Brooklyn, the K would run with the Q all the way down to Brighton Beach. In Queens, it would be the express counterpart to the G and extend beyond Forest Hills, running all the way out to Jamaica. 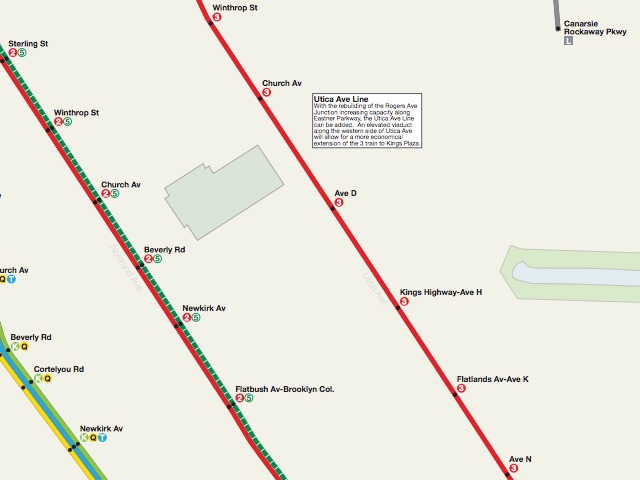 This is perhaps one of the more realistic proposals in Lynch's map, though that's not saying all that much. Mayor de Blasio has asked the city to study the feasibility of a Utica Avenue subway line, which has been proposed many times in the past. Indeed, in the early 1900s, planning for such a line got so far that the Crown Heights-Utica Avenue station was built with space for a north-south platform. The B46, which covers the same ground as this proposed extension of the 3 train, is the second-busiest bus route in the city, carrying 50,000 passengers per day. Unfortunately, the Utica Avenue line appears to have fallen to the bottom of de Blasio's transit to-do list, which is currently dominated by talking up his $2.5 billion streetcar. 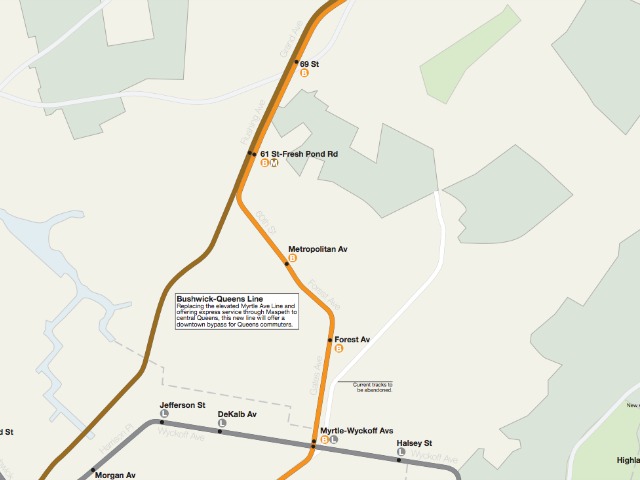 With the T and mythical K trains serving southern Brooklyn along with the Q, the B train would be free to take over the M's current path through Brooklyn, which would also be conveniently replaced by extensions of the Second Avenue Subway. Lynch envisions the B peeling off from M just past Myrtle Avenue to follow the path that the M currently takes up to Middle Village-Metropolitan Avenue—but in this transit utopia, it'd go even farther, running all the way to Woodhaven Boulevard, which would be transformed into quite the hub, connecting the E, F, G, K, N, and V trains. 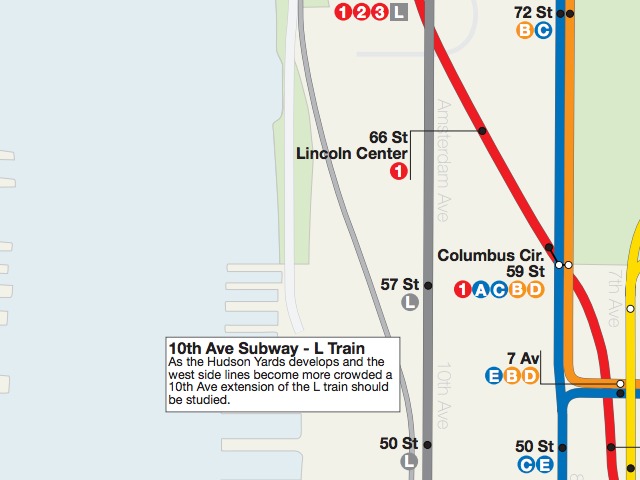 The L train would be business as usual if Lynch has his way—that is, until it hits Eighth Avenue, at which point it wouldn't terminate but continue to 10th Avenue, turning right and heading uptown until meeting up with the 1, 2, and 3 trains at 72nd and Broadway. Stops at 23rd, 34th, 42nd (joined by the 7, at the initially planned extension of that line), 50th, and 57th streets would serve portions of the far-West Side that are currently a bit of a hike from the nearest station.

5. The Second Avenue Subway On Steroids 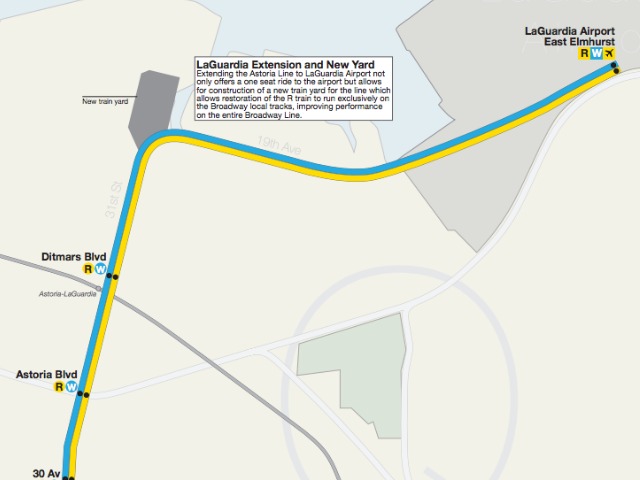 Forget just completing the second phase of the Second Avenue Subway and bringing the T and Q trains up to East Harlem: Lynch would like to see the T joined by the currently-defunct V and W trains, recoded in the new line's teal blue. At its northern tip, the T would cut west, hitting stops along 125th Street before joining up with the 1 on Broadway. The V, which would join the T in midtown and lower Manhattan, would then head into southern Brooklyn, covering much of the same ground that the R and D trains do today.

The W, for its part, would peel north in Queens, following the same path as the Q and N trains do now but continuing past Ditmars Boulevard, along with the R, to take passengers all the way to LaGuardia airport. Oh, and a magical AirTrain even more far-fetched than the one Governor Guomo is proposing would connect LaGuardia and JFK, with a quick pitstop at Citi Field for all those mid-transfer Mets games you've been dying to catch.

You can check out Lynch's map in its entirety here. Dream big or go home... in a cab.

#map
#MTA
#subway
#transit
#transportation
Do you know the scoop? Comment below or Send us a Tip