5 Cool Ways To Visualize And Track The Citi Bike Experience

Citi Bike is now almost in full swing, with thousands more riders expected to join the blue horde early next week when the program opens up to daily and weekly riders.

Riders are already making use of the CitiBike App, which lets people know where to find a bike or how long it will take to get to another station. In addition to the official App, there's been no shortage of ways mappers have been visualizing this new transportation network.

The coolest one, by far, is this map created by Oliver O'Brien, pictured above. It lets you monitor how many bikes are in the stations based on color codes, as well as monitor the use of the bikes over the past few hours. It's not only informative but pretty beautiful. With the color-coding, you can see which one areas get the heaviest use. Stations around congested areas like the financial district remain lightly used, while anything near the water on either side of Manhattan or Brooklyn is popular (except that weird one inside the Brooklyn Navy Yard. No one's really using that one). 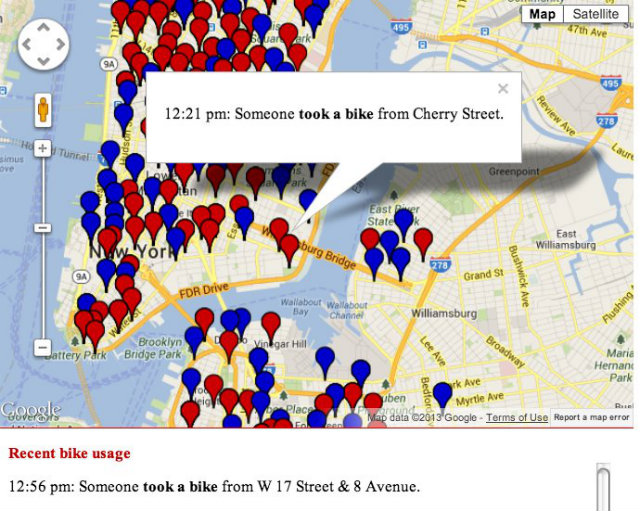 The Atlantic also put together a great map that updates in real-time and has a running commentary of recent bike usage: "12:51 pm: Someone brought a bike back to Great Jones Street." Okay, the map itself is useful. Philip Bump, who helped design the map, wrote: "There's something quintessentially Bloombergian about an emissions-reducing, health-improving system that can also be used to track people. Only very, very loosely, mind you: the data the city provides won't let you see where a bike is or even where a bike started and ended its trip. What it does allow, however, is for those with an inclination to track the number of available bikes at the various pick-up and drop-off points around the city and see when someone picks up (or drops off)." 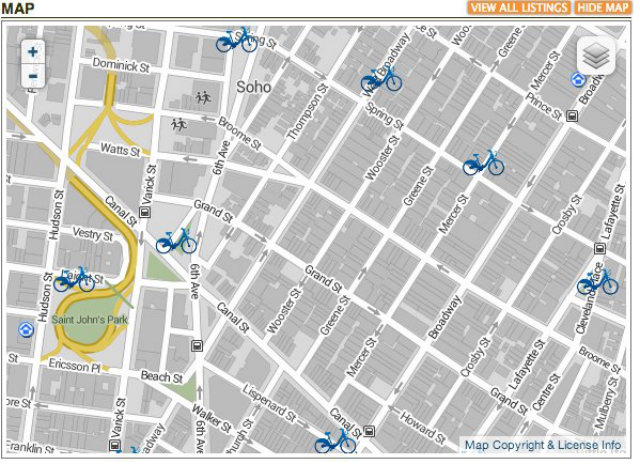 And then there are the Apps. There are already a few options on the iTunes store that are already giving you different look then the official Citi Bike App. 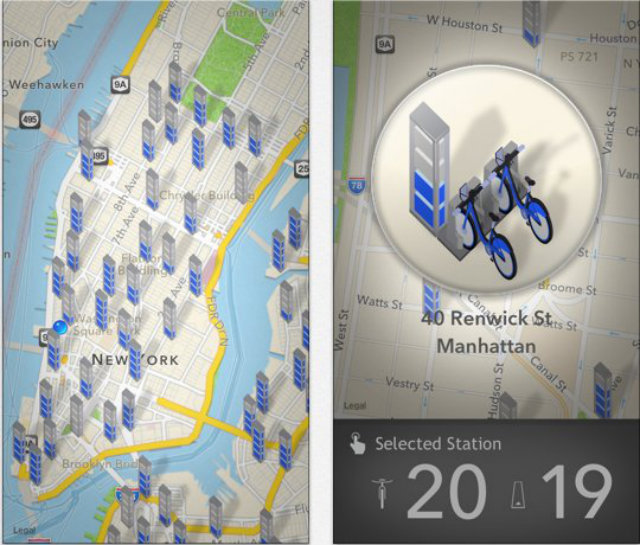 This App by Pliable Matter has a nifty way to look at how many bikes are at a station at the same time as looking at their location. It finally puts bar graphs to good use. 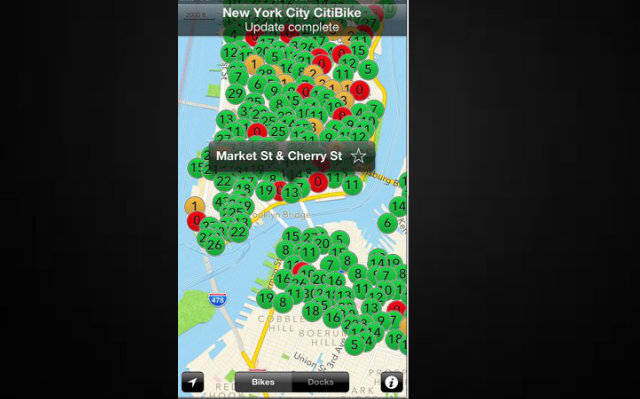 This other App from Bicyclette does the same thing, but with numbers instead of bars. It gets a little cluttered.

There are sure to be a whole bunch more maps and Apps related to Citi Bike, as ridership continues to surge.

A little update on those ridership numbers from the city: As of yesterday, 85,585 miles have been traveled by Citi Bike users. The most popular docking station for a beginning of a trip yesterday was 8th Avenue and West 31st Street, while the most popular end destination was West 21st St and 6th Avenue. The average duration of a ride? Seventeen minutes.

#apps
#citibike
#maps
#technology
#transportation
Do you know the scoop? Comment below or Send us a Tip