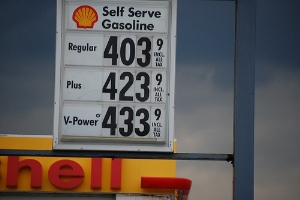 Gerritsen Beach posted this photograph of $4-and-over gasoline in Sheepshead Bay and asked, "Is this hell?" Well, for those drivers who could afford to fill up and head out of town this Memorial weekend, it might be heaven--the Daily News has two photos showing the contrast in traffic between this year's and last year's automobile rush on the Sunrise Highway.

According to the AAA, 37.9 million drivers are expected on the road this weekend, down from 38.2 million last year, which is the first decrease since 2002. And of those drivers, many may be choosing to stay closer to home, given the high gas prices.

Crude oil futures hit $135/barrel (double what it cost a year ago) this week and according to Marketwatch, if oil goes up to $200/barrel ("the upper end of Goldman Sach's prediction" for the next 6-24 months), gas could end up costing $6-7/gallon. Fuel Merchants Association executive vice president Eric DeGesero says "At $6 or $7 a gallon, it becomes less attractive to go to work. We haven't hit that point yet, but we might soon."

Mayor Bloomberg sort of saying "I told you so"--now that more commuters are using mass transit to get to their jobs in NYC, he says congestion pricing would have helped put more money into funding critical mass transit projects and for overall maintenance, "There are some things we can do, but keep in mind that every dollar that we spend in mass transit is going to come out of cultural affairs, schools, police, fire -- there's only so many dollars to go around."