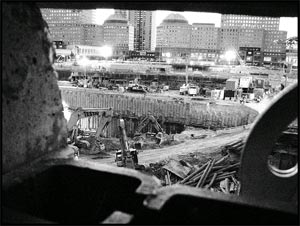 Better late than never: The Port Authority turned over part of the World Trade Center site to developer Larry Silverstein. This parcel of land is where two of the five planned towers will be built.

As part of Silverstein's deal with the Port Authority back in 2006, the PA would control the land but Silverstein, who held the lease to the WTC during the attacks, would be able to build on top of it. The deal required that the Port Authority turn over the land by December 31, 2007 or pay $300,000 per day past that date. So the PA ended up paying $14.4 million in late fees, partly offset by not paying the contractor a $10 million bonus for finishing the job on time.

The Port Authority had been working on something important - building the foundations for Towers 3 and 4. The AP reports the PA excavated almost "400,000 tons of concrete, soil and rock." Silverstein expects construction on the towers designed by Lord Richard Rogers (Tower 3 at 175 Greenwich Street) and Fumihiko Maki (Tower 4 at 150 Greenwich Street) to start within weeks. Last week, Daniel Squadron wrote in the Downtown Express that the Port Authority and Silverstein should be better neighbors to downtown residents as the massive construction takes place.