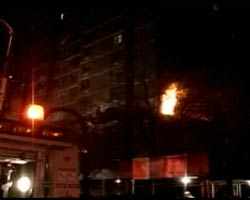 Last night, a three-alarm fire broke out on the 3rd floor of a 26-story building at 460 Grand Street. Firefighters issued a mayday call "firefighters became confused and disoriented in the heavy smoke and complex layout" of the apartment where the fire may have started.

One resident said her apartment filled with smoke within 5-10 minutes, and the smoke filled the building up to the 26th floor. Two residents trying to escape by elevator were injured when the elevator doors opened onto the floor where the fire was. The pair have life-threatening injuries.

A third seriously hurt person is expected to survive and thirty firefighters were among the injured. One resident looked on the bright side, telling WABC 7, "My family is fine. That's my main concern. I don't care about the building. Just care about my family.''

Here are fire safety tips from the FDNY, which recommends you develop an escape plan. Additionally, the FDNY says you should not take the elevator.