A Manhattan antiques store was caught selling millions in illegal elephant ivory, and its owners and a salesperson now face felony charges. "The conduct alleged in this case is abhorrent," Manhattan District Attorney Cy Vance said in a statement. "As the international elephant population hovers near extinction, too many ivory traders continue to profit from the slaughter of these beautiful, defenseless animals."

Undercover investigators visited Metropolitan Fine Arts & Antiques, at 10 West 57th Street, multiple times. During one visit, authorities say salesman Victor Zilberman sold them an item he said was mammoth ivory, and the investigators paid $2,000 to one of the store's owners, Irving Morano. From the DA's press release:

After the sale, [the NY State Department of Environmental Conservation] analyzed the item and identified it as a carving made from elephant ivory and not mammoth ivory.

A search warrant executed at MFAA uncovered approximately 126 elephant ivory articles, including two pairs of uncarved elephant tusks - standing approximately seven and five feet tall. DEC determined that the smaller pair of tusks were from an African savannah elephant, and that the elephant was a young adult when it died. The retail prices listed for the tusks were $200,000 and $150,000. The total of the listed sales prices for the ivory articles seized from MFAA exceeds $4.5 million. According to records maintained by DEC, this is the largest seizure of illegal elephant ivory in the history of New York State.

, "Only two-thirds of an elephant’s tusk is visible, with the remaining third buried deep inside the elephant’s head. Poachers, unwilling to waste valuable ivory (which sells at U.S.$1,300 a pound), access the rest of the tusk by hacking off the elephant’s face with machetes, hatchets, or axes. Often, entire families are poached at once, and the ground is littered with the faceless bodies of murdered elephants."

Journalist Bryan Christy has spent years reporting on how the demand for ivory is fueled by demand for religious objects carved from tusks as well as criminal operations funded by ivory smuggling.

Currently, NY State law prohibits the sale of elephant ivory, unless, the DA's office says, "the seller has been granted a license from the DEC. In 2014, with the support of District Attorney Vance, DEC, WCS, and others, Governor Cuomo enacted new restrictions which effectively banned the sale of ivory articles except in very limited circumstances, and strengthened penalties for sellers." Morano and his brother Samuel Morano previously had licenses to sell ivory, but the 2014 changes "made it effectively impossible for the defendants to renew their license, and the defendants did not attempt to renew it. Instead, the defendants elected to continue selling elephant ivory without a license." 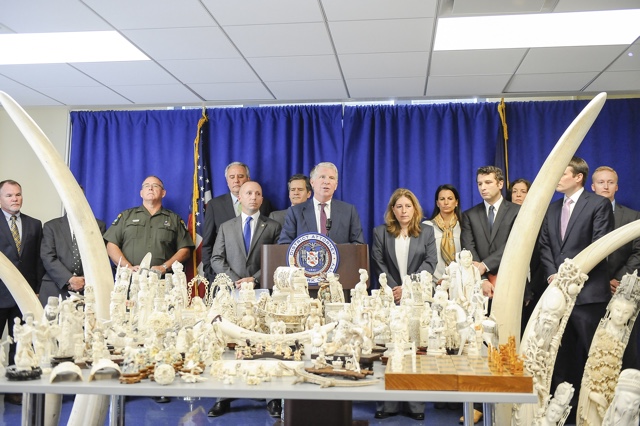 The Moranos and Zilberman are charged with the illegal commercialization of wildlife. The Wildlife Conservation Society's executive vice president of public affairs, John Calvelli, thanked the authorities for "working together to show that New York State has zero tolerance for illegal elephant ivory sales. New York State was one of the first states to ban ivory sales and it is clear our officials are serious about enforcing this law which is designed to ensure Africa’s elephants do not go extinct."