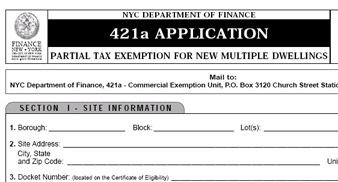 The city and state have worked out their differences and will move forward on overhauling the 421-a tax abatement program for new development. The City Council had passed a version last year that would have increased the amount of affordable housing and limited how much of the subsidy could go towards luxury housing, but then the Legislature's version, passed in June, included more neighborhoods, more units available to people with even lower incomes, and $300 million in breaks to Atlantic Yards developer Forest City Ratner Companies. The city wasn't sure about those additions and wanted changes.

The Times reports that the new version will include the neighborhoods mentioned in the Legislature's bill, plus this breakdown of how the benefit would work

In co-ops and condominiums, 20 percent of all units would have to be affordable to people making no more than 125 percent of median income, or just under $90,000 for a family of four.

As for affordable housing at the Atlantic Yards, the affordable units will have to be built at the same time as market rate ones, and 20% of any building must be affordable to get the full benefit from 421-a.

The bill will go to Governor Spitzer (and, for what it's worth, State Senate Majority Leader Joseph Bruno thinks the bill is fine with the changes). If Spitzer signs it, it would go into effect next summer.