Civil rights attorneys who have been fighting for 42 years to limit the NYPD's surveillance powers have filed papers in federal court asking a judge to prevent the department's practice of indiscriminately spying on Muslim communities and appoint an independent auditor to ensure the department complies with the law. “Investigations of any community which are not based upon indications of crime create fear and erode the confidence of a community in the power of a legal system to protect it,” attorney and NYU law professor Paul Chevigny said in a release.

“We brought this motion because even in the face of the startling evidence in the press reports, Commissioner Kelly and Mayor Bloomberg have declared the NYPD will continue its intrusive secret surveillance program targeting completely innocent activities in Muslim communities," Chevigny said. "Notwithstanding the prohibitions in the Handschu guidelines the NYPD is obliged to follow.”

Those Handschu guidelines were won in 1986, but the original suit was filed in 1971 by Chevigny, Martin Stolar, and Jethro Eisenstein. The 1986 consent decree [PDF] essentially prohibits the NYPD from spying on people or political activity when there is no "reasonable indication" of unlawful activity. It stipulates that to conduct surveillance without evidence of criminal activity, the City must first gain the approval of a three-member oversight board consisting of two police-appointed officials and one civilian appointed by the mayor.

After 9/11, the City argued that stipulation was too onerous, and a federal judge allowed for the NYPD to bypass the oversight panel altogether and significantly loosened the restrictions set in 1986.

Fast forward to the summer of 2011, when the Associated Press began reporting on the NYPD's Demographics Unit, which, to use one NYPD commander's phrase, "rake[d] the coals" of innocent Muslim communities in New York and New Jersey. The court filings include the AP's findings as exhibits, along with statements by NYPD Commissioner Ray Kelly, such as the speech he gave to Fordham Law students last spring:

Undercover investigations begin with leads, and we go where the leads take us. As a matter of Police Department policy, undercover officers and confidential informants do not enter a mosque unless they are following up on a lead vetted under Handschu. Likewise, when we have attended a private event organized by a student group, we have done so on the basis of a lead or investigation reviewed and authorized in writing at the highest levels of the department, in keeping with Handschu protocol. Some leads have taken us to very dangerous individuals.

Not a single, actionable lead has been produced by the NYPD's Demographics Unit (now called the Zone Assessment Unit). In a declaration that accompanies the filing, Chevigny argues that "The breadth of the operations described" in the AP's reporting "makes it apparent that these operations have been undertaken as a matter of NYPD policy, and are not isolated instances of abuse."

Chevigny also asserts that "limited discovery" provided to the plaintiffs by the head of the NYPD's Intelligence Division, Assistant Chief Inspector Thomas Galati, as well as a deposition given by Chief Galati, also proves that the NYPD continues to systematically violate the Handschu decree.

Handschu allows police officers to monitor public venues so long as they abide by the same rules as the public, but they are not allowed to retain what they find unless it is directly related to terrorist or criminal activity. Chevigny provides an excerpt of Chief Galati's testimony to show just how broadly (and he asserts, illegally) the NYPD is interpreting Handschu. 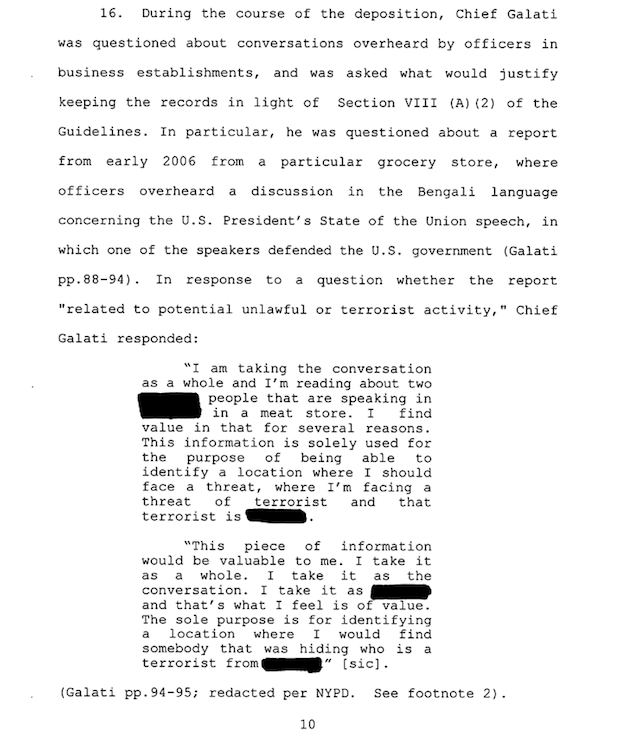 Chevigny and his colleagues—the same ones that have worked on the case since 1971—ask that the court order the NYPD to cease the surveillance, as well as its practice of surreptitiously infiltrating political or religious groups (such as Muslim student associations) and requests that the auditor closely monitor the NYPD's surveillance they claim to conduct under Handschu. The attorney's case is distilled in Chevigny's declaration (emphasis ours):

The NYPD is continuing a massive, all encompassing dragnet for intelligence concerning anything connected with Muslim activity through intrusive infiltration and recordkeeping about all aspects of life, politics and worship. The NYPD operates on a theory that conservative Muslim beliefs and participation in Muslim organizations are themselves bases for investigation. But the character and history of those beliefs and organizations do not support the theory that such beliefs are precursors to terrorist activity, and the guidelines do not permit investigation based on beliefs. The result has been and remains a huge, unjustified intrusion on the privacy of persons associated with Islam.

You can read the entire deposition of Chief Galati (minus the portions that the NYPD redacted) here [PDF].