Police are looking for the driver of a black Mercedes Benz sedan in connection with the hit-and-run death of a four-year-old on Staten Island. A witness told WCBS 2, "The Mercedes stopped. Everybody was yelling at him. He knew what he did. He pulled out of the parking lot of the deli where I am standing right now and he ran the child over. He has no regard for life if he could leave a little child laying in the street after he ran him over and just drove away. He has no conscience." 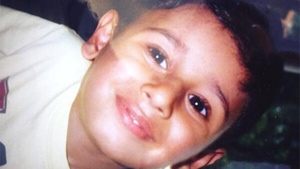 Kyrillos Gendy, 4, and his mother and seven-year-old sister were crossing Richmond Road from the west side to the east when a Mercedes Benz with tinted windows struck them on Friday night just after 8 p.m. The car had exited the Diddle Dee Bagel and Deli and was going south on Richmond Road.

Kyrillos apparently landed on the sidewalk, facedown. He was pronounced dead at Staten Island University Hospital while his mother and sister are apparently "catatonic" after the ordeal.

The police released surveillance video of the car and said the driver is described as a white male with black hair, approximately 24-35 years old.

A woman who said she was the injured woman's sister-in-law told the Staten Island Advance "the family of three had stopped by to visit her at her home across the street from the deli. The unidentified woman said her sister-in-law and the two children were headed back to their car, which the mother had parked across the street. 'They were crossing the street to pick up their car from the other side and the car hit all three of them,' she said."