4-Year-Old Who Died In Midtown Allegedly Tortured By Caretaker, Had History Of Abuse

Myls Dobson, the 4-year-old who died after falling off a bathroom ledge in a Midtown apartment this week, suffered regular abuse during his short life, and was allegedly tortured by his caretaker in the weeks leading up to his death, according to new reports.

Myls died while in the care of Kryzie King, 27, a transgender performer who was dating Okee Wade, the boy's father. Wade left Myls with King on December 18th, before getting arrested in New Jersey on an outstanding warrant for bank fraud. Doctors who examined the toddler's body discovered lacerations, bruises and cigarette burns. King, real name Janaie Jones, allegedly admitted to abusing the young boy, "giving him corporal punishment" in order "to control him;" the Post reports King told cops she was angry she had to cancel vacation plans to care for Myls.

Investigators say King regularly beat Myls, even whipping him in the head with a belt buckle and hitting him with a coat hanger. King also allegedly starved Myls, reportedly giving him a last "Christmas meal" on December 26th; in the few weeks he lived with her, officials say the boy lost 14 pounds.

The hours leading up to Myls' death were reportedly filled with torture. King told the cops that on Tuesday, she forced Myls to strip down to his shorts and stand outside on the apartment's terrace in the freezing cold. And on Wednesday, King told investigators Myls asked if she could take him to McDonalds—instead, she allegedly beat him and locked him in the bathroom, where he fell to his death. 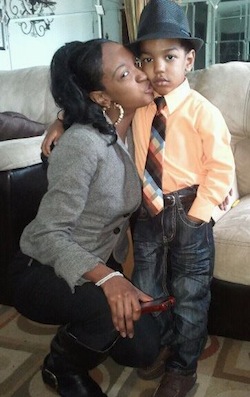 Reports indicate that abuse wasn't unfamiliar to Myles, who had been taken out of his mother's custody in 2011 after the Administration for Children’s Services accused her of child neglect. Myls briefly lived with his mother, 29-year-old Ashlee Dobson, in South Carolina and New York, and family members say she regularly beat him. "She would punch him and she would slap him. She’s not a person to have children,” Orquidia Wade, Myles' maternal grandmother, told DNAinfo.

According to DNAinfo, Ashley was arrested in 2011 for abusing Myls; she claimed the boy tried to run into traffic and was injured when she grabbed him and fell on top of him. She also claimed that later that day he fell down a stairway.

Dobson briefly lost custody of Myls after that incident. She regained it again that August, but by the end of the month ACS accused her of child neglect and Wade was awarded custody. Wade, meanwhile, has a lengthy rap sheet; he served time for attempted robbery, and was previously arrested on rape, attempted assault and sexual assault charges. ACS monitored Wade and Myls for one year before dropping the case.

ACS says they're investigating Myls' death, and yesterday Mayor de Blasio said the city will continue to work to strengthen the organization. "Every time we lose a child it is a call to arms,” he said. “We can’t rest until we make the system better."

#ashlee dobson
#child abuse
#midtown
#myles dobson
#myls dobson
#okee wade
Do you know the scoop? Comment below or Send us a Tip