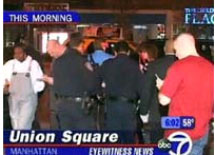 Early this morning, four people were hit by gunfire and another person was stabbed while in Union Square Park. WABC 7 says that a fight "broke out in a McDonald's at 17th and Broadway." And then someone fired into a crowd in Union Square Park - it's unclear if the fight from McDonald's traveled into the park.

Four men were hit by the gunfire and a woman was stabbed in a related incident. All this took place before 1AM this morning, and the park was full of people attending a Halloween party there. Once people started to hear gunfire near East 14th and Union Square West, it became chaos. One person said, "We just saw people running and then we heard gunshots. We started running."

The four shooting victims were taken to Bellevue and the stabbing victim was taken to St. Vincent's; all are in stable condition. The police believe the shooting may be gang-related and told WABC 7 that arrests were imminent.