The mutilated bodies of four teenaged boys were found in a Long Island park this week, and police suspect they were murdered by members of the MS-13 gang.

Police say the bodies of the victims, who ranged in age from 16 to 18 (media outlets have reported some discrepancies in the ages), were found in Recreation Village Town Park in Central Islip on Wednesday night. The bodies appeared to have been beaten to death, and cops believe the killers used knives or other sharp objects to mutilate them.

"They all suffered from significant trauma throughout their body. It appears they were killed with a sharp or edged instrument,” Suffolk Police Commissioner Timothy Sini told reporters yesterday. "We will confirm the manner in which they were killed is consistent with the modus operandi of MS-13. We are clearly looking into that possibility although we have not ruled out other possibilities at this point."

Victims include 18-year-old Jorge Tigre, whose family says had been friends with the gang members but attempted to stay away from them after the gang orchestrated a fatal machete attack in September. "He kept his distance from them,” his sister told the News. "I think they set a trap for him."

His brother told the Post he recently found messages on Tigre's computer reading, "I don’t want to do these things anymore. I want out." 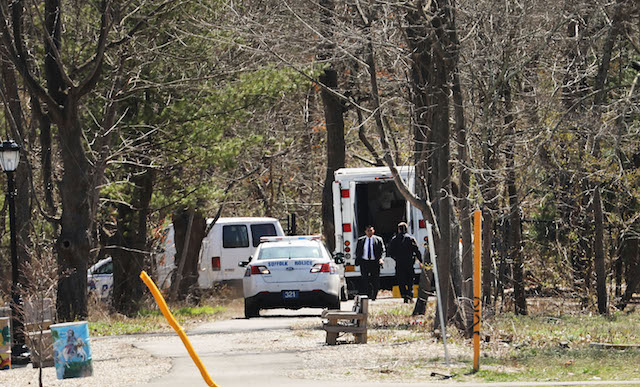 Other victims include Justin Llivicura, 16, Jefferson Villalobos, 18, and Michael Banegas, 18. Villalobos hailed from Florida and was visiting family in the area. NBC New York reports half his face was missing when his body was found. Banegas, Villalobos's cousin, was reportedly suffocated with a plastic bag.

A friend of Banegas's reportedly escaped the massacre, telling Villalobos's family he fled the park when he saw men come out of the trees with machetes. "The gang members came out and told them to kneel down -- and then he was just able to run for his life," Villalobos's cousin, Yensy Fuentes, told NBC. "He was the only one that made it out."

This section of Long Island has been plagued by violent gang attacks for some time. Last month, more than a dozen MS-13 members were named in a federal indictment related to the murders of seven people, including the murders of teenagers Nisa Mickens and Kayla Cuevas in Brentwood last September. The teens, who were best friends, were killed by "swinging baseball bats and machetes" in a suspected revenge attack.

The FBI is working with authorities to find the gang members responsible for this week's slayings. They are offering a $25,000 cash reward for information leading to an arrest.