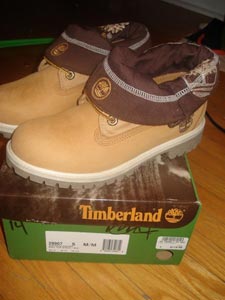 The cops were looking for an alleged gang member in Bed-Stuy when they found something very disturbing - a 4-day-old baby in a Timberland shoe box. After arresting the 21-year-old they were looking for, police found the baby girl in an apartment that is described as filthy. Also found in the apartment was a loaded .45-caliber pistol, ammo, and a small amount of cocaine. Police arrested the 19-year-old mother for endangering the welfare of a minor. The baby girl and a 15-year-old in the apartment were turned over to the Administration for Children's Services.

One police source told the Daily News, "The apartment was total hell - roaches, garbage everywhere. There was nothing around that looked like they were caring for this baby. No food. No nothings. Its only playmate was the roaches." The baby was taken for treatment to Woodhull Hospital, where she was born on September 2nd.

The baby's grandfather says that his daughter didn't put the baby in a box, "She didn't have the baby in a shoebox. The baby was in a car seat. She's a good mother and I'm a proud grandfather. She's doing the best she can."