The Port Authority and Delta are completely overhauling LaGuardia Airport, building a single, connected terminal in the place of the four separate ones, and in addition to Gov. Andrew Cuomo's poorly thought out AirTrain connection from Willets Point, the redone LaGuardia is set to include a ferry terminal. Cuomo announced the $4-billion overhaul with Vice President Joe Biden (who once famously said the LGA experience is like "some third world country") at a press conference this afternoon.

"Gov, I wish everything I said to you that was truthful but controversial turned out this way," Biden said, adding a jab about the Holland Tunnel for good measure. "I wish I had spoken to you about a tunnel before this. There's a river around here with tunnels under it that haven't been modernized since 1927. I wish Gov. Christie was here to talk more about it, but that's another story for another day."

Right, so about that new airport. Given the piecemeal way the four spread-out terminals of LaGuardia have been built, the only way to meaningfully improve it is to tear it all down, a Port Authority advisory board told Cuomo.

"They said, 'There is no way to fix this. We need to literally tear it down and rebuild it,'" he said.

Cuomo called the current LaGuardia "un-New York," saying, "It's slow. It's dated. It has a terrible front door entranceway to New York." 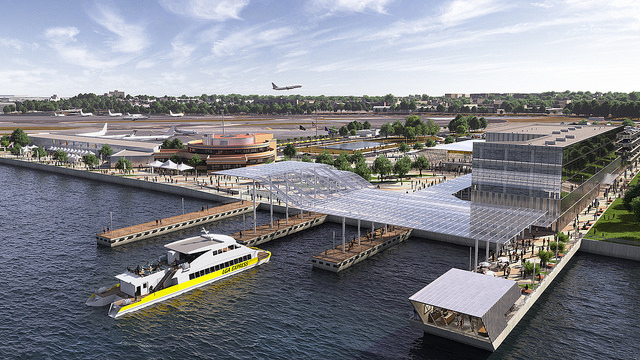 The overhauled LaGuardia is set to include a ferry dock at the Marine Air Terminal. (Governor's Office)

The new design, compiled by the board using elements of entries to a competition, moves the terminal 600 feet closer to the Grand Central Parkway and provides 240 percent more space for airplanes to move around, according to Cuomo. Delta owns terminals C and D but has agreed to redevelop its portion in tandem with the state. The $4 billion redevelopment of terminals A and B is half-funded by private contractors, who will operate and profit from the new facility.

The ferry is supposed to operate out of the Marine Air Terminal. It's unclear what the terminal's role will be in an overhauled LaGuardia, or how ferry passengers will get between it and the rest of the airport, but a rendering shows it set apart (in the top center of the top rendering above) from the new, connected building. The Marine Air Terminal is a designated New York City landmark so it seems unlikely that it will literally be torn down.

The redone airport is also supposed to include new parking garages, an automated tram, and a "world-class retail and hotel complex," according to the governor. He emphasized that this is an initiative that is really in motion.

Work is supposed to begin on the airport early next year, pending final Port Authority approval, with new sections accessible by summer 2019, and construction complete another year and a half later. The airport is supposed to continue operating throughout the work. 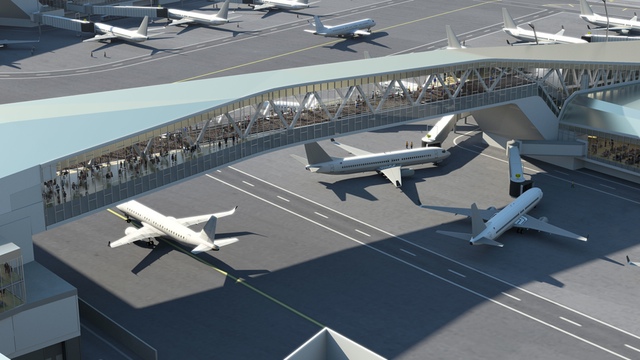 Biden said that the new airport will increase concession, terminal, and security space to thin crowds, and will add gates. He touted the 8,000 jobs he said the project would create, calling them "middle class jobs, jobs you can raise a family on," and laid the Cuomo praise on thick.

"I'd like to take the gov with me everywhere and encourage and embolden other governors to step up and do the same thing," he said.

#air train
#andrew cuomo
#ferry
#joe biden
#laguardia airport
#port authority
Do you know the scoop? Comment below or Send us a Tip