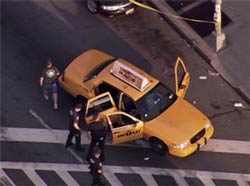 The third woman suspected in the Brooklyn shooting-robbery of taxi driver Enois Malbranche turned herself in this morning. WABC 7 reports Ivana Pittman, 18, will be arraigned on attempted murder charges tomorrow morning.

Last Thursday, 62-year-old Malbranche picked up three women who refused to pay their $9.80 fare and shot him in the eye (with the bullet exiting the other eye). Malbranche, who is in stable condition, also said they attempted to rob him. April Pierce, 19, and Erica Belgrave, 20, surrendered to the police earlier this week.

Before surrendering, Pittman apparently decided to take her side of the incident to the Daily News. In the exclusive interview, Pittman said one of the two others was the shooter and that the shooter was upset she didn't get any money. Pittman said she was "so sorry," "It was disgusting. Somebody's just been hurt, could have died for all we know. All you thinking about was the little bit of money he had. That's somebody's father, grandfather. That could have been mine. He didn't deserve this." Pittman's lawyer says that they welcome a polygraph test.

However, Malbranche's son said,"The damage is already done. They can apologize as many times as they want. I'm still upset. They should have known before what would happen if they used a gun. They don't care."

#brooklyn
#Enois Malbranche
#taxi driver shooting
Do you know the scoop? Comment below or Send us a Tip