Five fraternity members from Manhattan's Baruch College will be charged with murder and 32 others face criminal charges for their involvement in the December 2013 hazing death of 19-year-old Chun "Michael" Deng in the Poconos. Deng, who was one of four new pledges accompanying members of Pi Delta Psi at a rented house for an annual weekend retreat, sustained severe brain trauma during an outdoor hazing ritual known as the "glass ceiling."

In the ritual, blindfolded participants carry weighted bags on their backs while trying to proceed across a field to someone calling them while other fraternity brothers strike and tackle the blindfolded target. Deng was reportedly blindfolded and carrying a backpack loaded with 30 pounds of sand in the cold outside the house as other fraternity members repeatedly hit him. Pocono Mountain Police tell the NY Times that Deng "was lifted up and dropped on the ground in a move known as spearing." 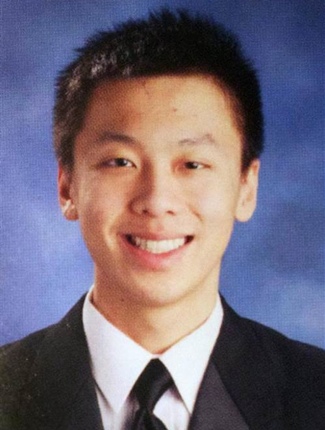 Deng complained that his head hurt, and then fell unconscious. Pi Delta Psi fraternity members did not call 911 after Deng passed out, and allegedly waited hours before bringing him to a hospital some 30 miles away. They did, however, find time to Google Deng's symptoms and contact national fraternity brothers to seek advice.

The younger brother of Queens Representative Grace Meng faces criminal charges for allegedly helping to cover up the death. Andy Meng, 30, was serving as national president of the fraternity when he received alarmed calls from fraternity brothers at the house. According to court papers obtained by WFMZ, Meng allegedly instructed them to hide all fraternity items. Some members also allegedly changed Deng's clothes while he was unconscious.

By the time the fraternity brothers delivered Deng to the hospital, he could not be revived. He died the next morning. According to an autopsy report, Deng was subjected to repeated blunt force trauma to his head, torso and thighs.

A Monroe County grand jury came back with a recommendation for third-degree murder charges for Charles Lai, Kenny Kwan, Raymond Lam, Daniel Li and Sheldon Wong. The fraternity is also being charged. If convicted, the five face up to 20 years in prison.

Thirty-two other fraternity members, including Meng, will also be charged with assault, hazing and criminal conspiracy.

"Too many families have been devastated as a result of fraternity hazing, with at least one student dying every year from hazing since 1970," the Deng family said in a statement. "Fraternities and their members must be held accountable, and this step by authorities is an important one. Michael was a wonderful, beloved young man, and, in his honor, the family will also continue pursuing its wrongful death case against the fraternity to cause it and other fraternities to change so that other parents will be spared the loss of a precious child."

The Dengs have filed a wrongful-death lawsuit against Pi Delta Psi. The Times reports that the family will now amend the lawsuit "to take into account the names and roles of those involved in Mr. Deng’s death."