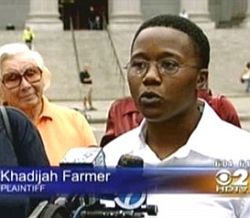 Anyone who’s ever declared, “You couldn’t pay me to eat at Caliente Cab Company” should consider the case of Khadijah Farmer, whose humiliating experience at the West Village tourist trap netted her $35,000 today. While patronizing the restaurant after the Gay Pride parade last year, Farmer was ousted from the ladies room by the bouncer, who interrupted her while she was on the toilet because he thought she was a he.

The bouncer, who had been responding to a customer complaint, refused to look at Farmer’s I.D., which proves her gender. He then added injury to insult by ejecting Farmer’s party from the restaurant mid-meal. In the settlement announced today, Caliente gets to deny the facts of Farmer’s complaint, but will add gender identity to its non-discrimination policy, adopt a gender-neutral employee dress code, and provide sensitivity training to employees. Oh, and cough up 35K.

The gender discrimination lawsuit was filed in October in State Supreme Court by Farmer and the Transgender Legal Defense and Education Fund. In a statement issued today, Farmer says she’s “very happy that the restaurant has taken appropriate steps to ensure that all patrons, regardless of how masculine or feminine they appear, are treated with dignity and respect.”