A $300,000 late-model Ferrari bearing a police parking placard sat unattended in a No Standing Zone in Lower Manhattan yesterday afternoon, no doubt on official police business. Given that the placard is registered to the Sea Gate Police Department, a private police force wholly separate from the NYPD with full arrest powers that patrols a gated community in Coney Island, 12 miles from where the vehicle was parked, what official business do you think they were on? 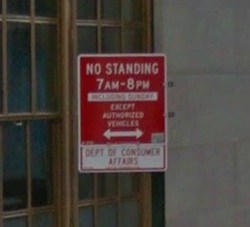 A tour guide who spends most of his day walking around the city, says he spotted the car on Morris Street near Broadway. "I've seen other cops use regular cars and abuse those [placards], but this is just the cherry on top," said the tour guide, who requested that his name be withheld because he did not want to be identified criticizing the police. "Police business? Come on. It's just abuse, man. It's not cool, you know?"

We weren't aware of the Sea Gate Police Department's existence, and neither was an NYPD spokesman.

An employee at the Patrolmen's Benevolent Association flatly stated that they did not represent the officers on SGPD's force.

Sea Gate's website, befitting of the oldest police force in Brooklyn, directs complainants to a telephone number that has been disconnected. An email to the department wasn't immediately returned. The ninth graders in Miss Henderson's Internet Applications class who designed the department's website were also unavailable for comment.

#ferrari
#official police business
#parking placards
#Sea Gate Police Department
#original
Do you know the scoop? Comment below or Send us a Tip
A new Gothamist is coming! We’ve moved comments over to our beta site. Click here to join the conversation and get a preview of our new website.