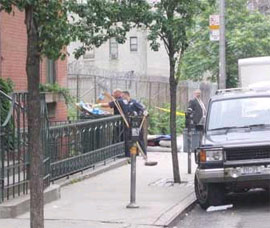 On June 6, 2004, a woman's dead body was found in a steamer trunk on East 13th Street between 2nd and 3rd Avenues. Years later, the police have found the murderer. Or, rather, the murderer found them.

The Post reports that Michael Mohr of Arizona appeared at a precinct to confess. Mohr said that Jesus Christ made him confess, after undergoing a religious conversion. Apparently Mohr and the victim, a homeless woman named Myrna Gonzalez, had gotten into an argument and Mohr strangled her.

One police source said, "He was relieved. He was a little emotional. He was just glad to get it off his chest." But another gave a Lenny Briscoe-esque comment, "We wish Jesus would solve more of these."

#arizona
#crime
#Gonzalez
#homeless
#jesus
#jesus christ
#On June
#police
#The Police
#the post
Do you know the scoop? Comment below or Send us a Tip