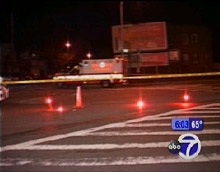 There were a number of deaths and injuries from incidents all over the city early Sunday morning. The first was a collision between a Toyota and BMW on Hylan Boulevard in Staten Island. The Toyota's driver, 29-year-old Paul Vinin, died while the BMW's driver Jolyn SIlva, was critically injured. Silva's passenger, 17-year-old Paulina Vivirito, had minor injuries. The Staten Island Advance, which said that Toyota "t-boned the BMW", reports that both Vinin and Silva had suspended licenses, from not paying tickets.

Around 3AM, a BMW heading from the Bronx to Manhattan hit the wall on the Madison Avenue Bridge and flipped; the 28-year-old driver died. Before 4AM, a 22-year-old man crossing 108th Street at Otis Avenue was the victim of a hit-and-run driver in Corona, Queens. The victim, Elario Morales-Cruz, is in critical condition at Elmhurst Hospital. Police are looking for the driver of a silver car, who may not have known Morales-Cruz was hit.

And in Brooklyn, a motorcyclist died on the Belt Parkway. After rear-ending a car, he fell from his bike and another car hit him.