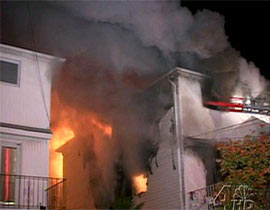 This morning, a home in Rosedale, at 267th Street and 149th Road, caught fire. Two people have been killed, as the second floor of the two-family home collapsed.

The call about the came at 4:58AM and neighbors say that a mother and two children lived in the home. Firefighters reportedly saw victims trapped on the second floor, but were unable to rescue them. The FDNY fought the fire from the outside and the fire was contained by 6:20AM.

It's unclear what caused the fire. A fire official told WNBC, "It looks bad and is probably worse than that."

The FDNY urges everyone to change the batteries of their smoke detector as daylight savings time comes our way. Today, they will be distributing fresh batteries all this week; this afternoon, they will be in Queens, at Jamaica Centre Parsons/Archer Train Station, Ridgewood Mémorial Triangle- Myrtle Avenue and Cypress Avenue, and the corner of Ditmas Blvd and 31st Street at 4PM-6PM.

Update: Reports are now saying a total of three people died in the fire.