A second health care worker who treated the man who died of Ebola last week has been diagnosed with the virus, Texas state health officials confirmed. Dallas police have been alerting neighbors, and the Dallas Morning News reports, "A hazardous-materials team was preparing to decontaminate the apartment complex where the latest Ebola patient lives, police said. Dallas Mayor Mike Rawlings was also at the apartment complex."

This health care worker noted a fever last night and was isolated. Now 76 staffers at Texas Health Presbyterian are being monitored.

On Sunday, it was reported that nurse Nina Pham tested positive for the deadly virus. Pham treated Thomas Eric Duncan, the Liberian man who was diagnosed with Ebola while in Dallas. Duncan died 10 days after he was diagnosed, and criticism has been mounting that the hospital was woefully unprepared to prevent an outbreak. 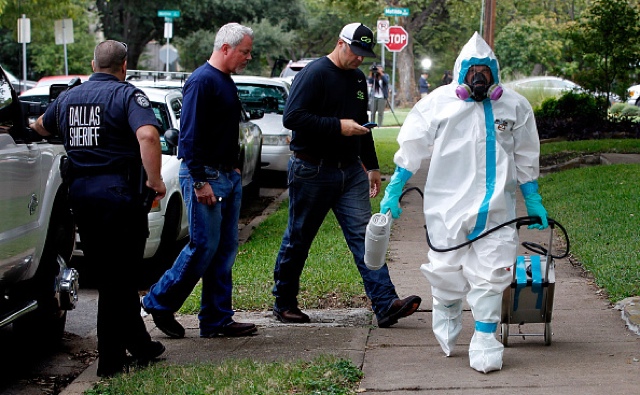 A decontamination team outside of Nina Pham's apartment (Getty Images)

A second case of Ebola among the nearly 100 doctors, nurses and assistants who treated Mr. Duncan for 10 days at Presbyterian was not unexpected. For days, federal health officials have warned that, in addition to a nurse who was confirmed to have Ebola on Sunday, other cases were likely.

But the appearance of a new Ebola patient replayed a public-health drama that unfolded in this city twice before in a two-week period. It has also renewed questions about the hospital’s infection-control procedures and the C.D.C.'s oversight of the hospital and of the initial response to the first Ebola case diagnosed in the United States.

A CDC epidemiologist told the Washington Post, "They kept adding more protective equipment as the patient [Duncan] deteriorated. They had masks first, then face shields, then the positive-pressure respirator. They added a second pair of gloves." (Here's a graphic of how health care workers should treat a patient with Ebola.)

CDC Director Tom Frieden noted, "At some point there was a breach in protocol and that breach in protocol resulted in this infection," raising the ire of Bonnie Castillo, a nurse and disaster relief expert at National Nurses United. She told the Daily News, "You don't scapegoat and blame when you have a disease outbreak. We have a system failure. That is what we have to correct." The National Nurses United also claims that a nurse initially insisted that Duncan be put in isolation, but hospital officials refused.

The CDC is now sending a special Ebola response team to Dallas, including nurses from Emory University which successfully treated Kent Brantly, the doctor who contracted Ebola in Africa and was flown back to the U.S. for hospitalization. Frieden said, "I wish we had put a team like this on the ground the day the first patient was diagnosed. That might have prevented this infection. But we are prepared to do this in the future with any case anywhere in the U.S." 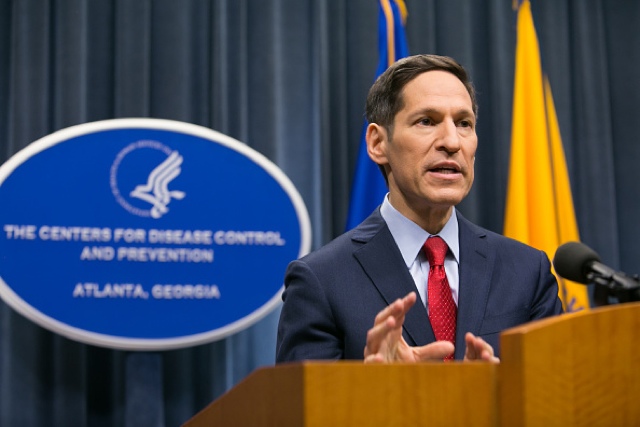 Plasma is a component of blood that contains virus-fighting proteins called antibodies. When someone donates plasma, their blood is drawn into a machine that separates out the plasma and returns the red blood cells to the donor.

"There is a strong theoretical possibility that this could help, particularly if this is given early," said Dr. William Schaffner, chair of preventive medicine at Vanderbilt University Medical Center in Nashville, Tennessee.

Here's how it works: When confronted with a virus, the immune system creates antibodies to specifically target that virus, kill it and keep it from coming back, he said. Once a person has antibodies, they stay in their blood for life. If the Ebola antibodies found in an Ebola survivor's blood can be imported into struggling Ebola patient's body, those antibodies can theoretically help the patient's immune system fight off the deadly virus.

"What those antibodies do is bind to the virus," Schaffner said. "They find the virus and bind to it and prevent it from multiplying further."

Schaffner said even though the sick person's body is trying to make antibodies, an infection can be so overwhelming that the sick person's immune system might not be able to keep up with the invading virus. As a result, the sooner someone gets a plasma transfusion, the more likely it is to help that person recover, he said.

Pham, 26, appears to be improving and issued a statement yesterday, saying, "I’m doing well and want to thank everyone for their kind wishes and prayers. I am blessed by the support of family and friends and am blessed to be cared for by the best team of doctors and nurses in the world here at Texas Health Presbyterian Hospital Dallas.”

As the CDC points out, "Ebola is not spread through the air or by water, or in general, by food" but it is spread through direct contact, "through broken skin or mucous membranes in, for example, the eyes, nose, or mouth."

#dallas
#ebola
#nina pham
#texas
#Thomas Eric Duncan
Do you know the scoop? Comment below or Send us a Tip