Last week we reported that our favorite piece of sandhog hardware, the massive Tunnel Boring Machine [TBM], would soon be put to work digging the Second Avenue subway. Well, the stories are true! Here's a look at the TBM cutter head that will be delivered to the Upper East Side in pieces over the next three weeks. The TBM blade head is 22 feet in diameter and with all its back-up equipment, excavation material haulage system and removal equipment, it will be over 300 feet long and weigh 485 tons, according to a community letter obtained by the Upper Green Side. The MTA says it's so big they'll need to close down part of Second Avenue during delivery, so get your earplugs ready, locals:

All lowering of the TBM and back-up components will take place at the deck opening between 92nd and 91st Streets. A large crane will be located south of this deck opening to perform the lowering operations. Due to the size of the machinery and DOT oversize load restrictions, the delivery of this equipment will need to occur at night between the hours of 11:00 p.m. and 6:00 a.m., on weekdays only.

Lifting the equipment off the trucks and lowering into the launch Box will require up to three lanes of Second Avenue to be closed to traffic for two weeks (April 12 through April 23) and one lane for one week (April 26 through April 30) between the hours of 11:00 pm and 6:00 am. In addition, all lanes will be shut down during the actual pick of the equipment for safety reasons.

Speaking of the Second Avenue subway project, did you know that in the late '60s/early '70s the MTA seriously considered routing the elusive subway line as far east as Avenue C? Second Avenue Sagas recalls the MTA once planned to divert the line east at 17th Street toward Stuyvesant Square (near Stuyvesant Town), under 15th, 14th and 13th Streets to Avenue A, south to Essex Street along East Broadway and across Chatham Square. This Avenue A extension would have cost an additional $57 million. Then the MTA planned an additional loop to Avenue C, between 14th and Houston Streets, for an extra $55 million. By 1974, these plans had gotten so expensive the whole project was shelved.

Below, more on this particular TBM (which has quite an illustrious history!), plus a gorgeous photo of what the entire TBM rig looks like once it's down in the hole with all the "trailing gear" attached. 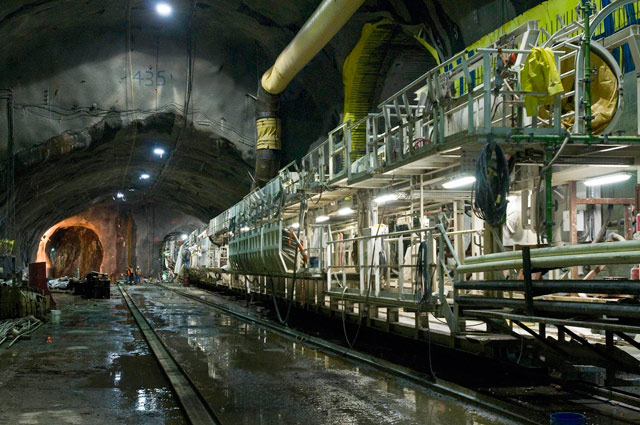 The TBM "Trailing gear" is a long set of equipment attached to the TBMs, seen here on the 7 line extension. (Courtesy NYC Transit's Twitter)

A spokesperson for the MTA tells us, "The Second Ave Subway TBM was originally manufactured by Robbins about 30 years ago. It is a main gripper, hard-rock machine that has been used on at least 4 other projects and it has been reconditioned to be 'like new.' Schiavone rebuilt the machine in their Newark, N.J., yard where it was assembled and tested, and it has now been disassembled for shipment to the site where it will be reassembled again in the Launch Box.

"The last project that the TBM was used on was the Fall River CSO Project in Fall River, Mass. It was first used to dig the 63rd Street Tunnel in the late '70s. The cutterhead for the TBM has a diameter of 22 ft."

#digging tunnels
#second avenue subway
#tbm
#tunnel boring machine
Do you know the scoop? Comment below or Send us a Tip
A new Gothamist is coming! We’ve moved comments over to our beta site. Click here to join the conversation and get a preview of our new website.