2nd Ave. Stabber's Uncle Says He Warned Cops, But They Deny It 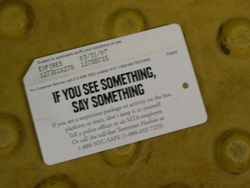 The uncle of Lee Coleman, the man that stole several knives and slashed two people on 2nd Ave. last Saturday before being shot by an off-duty officer, says that he called the police hours before the attack and that they refused to help. Alexander Flowers said that on 4 a.m. Saturday morning he saw his nephew, who was clearly disturbed. He called Co-op City security and then the police around 7 a.m. According to the New York Post, Flowers received a visit by two officers at 8 a.m. and then two detectives at 10 a.m.

All four officers, he said, told them they couldn't help.

"They said he [Coleman] wasn't a child or a senior citizen. [A detective] told me he couldn't take a report because of that fact," Flowers said. "They should have listened to me and taken heed of what I was saying. If they had responded in ample time . . . it could have been prevented. They didn't respond."

NYPD spokesman Paul Browne disputed Flowers' account yesterday, saying that the first time the uncle contacted police was at 10:45 am Saturday morning to file a missing person's report regarding his nephew. That allegedly came 15 minutes after Coleman had already gone on his 2nd Ave. slashing spree. Flowers responded to the Post, "They are lying. They're lying, period. I'll tell them to their face that they are liars." Our question: Are there cameras in Co-Op City lobbies?

Coleman's victims Amarjit Singh and Susan Barron are still hospitalized, but reportedly their conditions are improving.