If you want to use your car as a weapon in Manhattan, you just need to pay a $250 fine.

The Manhattan DA's office made a last-minute decision not to go to trial an SUV driver who was witnessed ramming his vehicle into a cyclist during a road rage incident last year. 33-year-old Jose Henriquez, who resides in Queens, fled the scene after plowing into the unidentified cyclist on Avenue B last June. According to Streetsblog:

Michael (not his actual name) was riding his bike on Avenue B on the Lower East Side. Avenue B is a narrow two-way street with no bike lanes and parking on both sides. To avoid being doored, Michael was riding in the center of his lane. When a motorist approached Michael from behind, tailgating and honking, he responded by flipping the driver off.

Approaching the intersection of Avenue B and E. 13th Street, Michael slowed for a red light. According to the affidavit, the driver, still behind him, accelerated, striking the back of Michael’s bike and flipping him over the handlebars, causing him to hit his head on the ground. With Michael in the street bleeding from his face and head, the motorist swerved around him and attempted to drive off. A second motorist on the opposite side of the intersection tried to block the way, but the SUV driver went around the vehicle and left the scene.

Witnesses wrote down the SUV's license plate and police were able to track down Henriquez. And after the cyclist's attorney, Steve Vaccaro found witnesses who were willing to testify, prosecutors agreed to pursue assault charges against Henriquez. The top charge, third degree assault, comes with a maximum penalty of one year in jail.

But on the eve of the trial this week, the Manhattan DA's office offered Henriquez a plea deal. Henriquez pleaded guilty to leaving the scene of an accident with property damage, and was sentenced to a fine of $250.

A spokesperson for Manhattan DA Cy Vance declined to comment.

Vaccaro says he was not aware that prosecutors were offering Henriquez the settlement until it was a done deal. "It takes a lot of work to find witnesses and make time to come forward and testify, and we were ready to go to trial this week," Vaccaro tells us. "They just settled it out from under us without even contacting me or with victim. Of course they don't have to do what the crime victim says, but usually they go through the motions of letting us know."

Asked to speculate as to why the trial was aborted at the eleventh hour, Vaccaro says, "I think there was a supervisory-level decision that it wasn't an important enough case to go through with. I thought the case was solid, and I think it looked solid to the ADA, because she did everything necessary to push it to trial."

The cyclist, who sustained lacerations to his face and needed some 40 stitches, reached a civil settlement for financial compensation, but Vaccaro is troubled about the message the DA is sending to wantonly reckless drivers.

“Our city functions on the premise that people can freely operate deadly weapons on our streets — cars — and can be trusted to do so responsibly,” Vaccaro told Streetsblog. “When a motorist commits a deliberate strike, it goes right to the heart of our urban social compact and should be punished as surely and severely as gun violence. When Cy Vance was running for district attorney, he stated repeatedly that he understood the vulnerability of cyclists — invoking the fact that his own son used a bike for transportation in the city — and promised to protect us. He is failing in that promise.”

Exactly one month before running over the cyclist and driving blithely away, Henriquez shared this choice Lil Wayne lyric on Facebook: 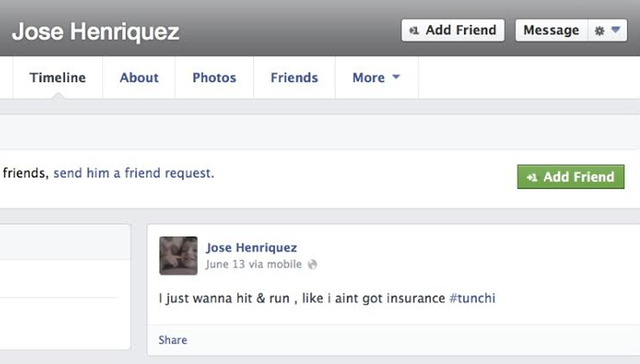 #road rage
#suv
Do you know the scoop? Comment below or Send us a Tip