229 NYPD Officers Disciplined For Misconduct in 2012

A total of 229 police officers were disciplined in 2012, according to a report released today from the Civilian Complaint Review Board. Let's dig into the data, shall we?

For the purposes of this study, a "complaint" is described as "a case stemming from a civilian encounter with police, in which the civilian believes the officer(s) committed acts of misconduct." Furthermore, "an individual complaint received by the CCRB can contain multiple allegations against one or more officers. Each allegation the agency investigates falls within one of four categories: force, abuse of authority, discourtesy and offensive language."

However! The board notes that Hurricane Sandy knocked out power to its main phone line, meaning the number of calls dropped precipitously during the several months it remained out of service. Prior to Sandy, the number of complaints were up one percent from 2011. Complaint activity remained low until March of 2013, when the former system was finally restored, at which point complaints again rose to normal levels—so take that 3 percent decrease with a grain of salt. 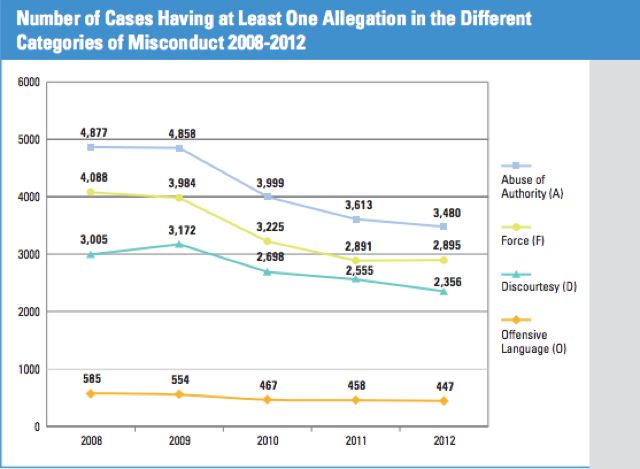 Anyone interested in parsing the data themselves can do so here.

#cops
#nypd
#police misconduct
#original
Do you know the scoop? Comment below or Send us a Tip