Over the weekend, a pit bull puppy was hospitalized with a broken neck after being brutally thrown from a moving car in Long Island. Three-month-old pup Joey, who was tossed out in a trash bag, fractured six neck vertebrae when he hit the ground. ASPCA and the Suffolk County SPCA are now offering a combined $20K reward for any information leading to an arrest and conviction in the case. 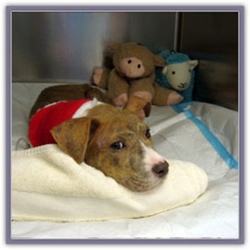 “We were both outraged and saddened to hear about this disturbing case of violent abuse, and the callousness that was demonstrated by those responsible,” said Matt Bershadker, senior vice president of the ASPCA’s Anti-Cruelty Group. “While our ultimate hope is that these types of heinous acts never occur, this is a message that cruelty toward animals will not be tolerated. We are pleased to be in a position to help those who are helping Joey.”

"Somebody knows what they did," Roy Gross, chief of the Suffolk SPCA, told Newsday. "Somebody will go in a bar and talk...This person has to be apprehended, taken off the streets and punished." He noted that serial killers often start as people who abuse and torture animals: "Maybe you don't care about an animal, but do you care about your fellow human being or a child?" Gross said. "Because people like that have no regard for anybody."

In addition to his neck injuries, doctors say Joey was malnourished, covered with fleas, and had bite marks on his neck, which might indicate the pup had been used as a bait dog by dog fighters. But on the plus side, the Veterinary Medical Center of Long Island wrote in an update on their website that Joey "slightly moved his front feet early this morning, which is great news! He continues to have a great appetite, and gets stronger every day!"