2014 Was The Most Popular Year For Bicycling In NYC

The popularity of cycling in NYC continued to increase in 2014, based on data collected by DOT and released today.

The agency began gathering cycling data once per year in 1985, upping it to three times per year in 2007, and then to 10 in 2008. The count captures cyclists crossing the four East River bridges, entering and exiting the Staten Island Ferry at the Whitehall Terminal and each avenue and the Hudson River Greenway at 50th Street.

In 2014, the DOT switched from human to automated counters on the East River bridges for more thorough and accurate readings, meaning that the 2014 data is the most accurate ever. Skeptics should note that the automated counters are randomly validated by human observers. 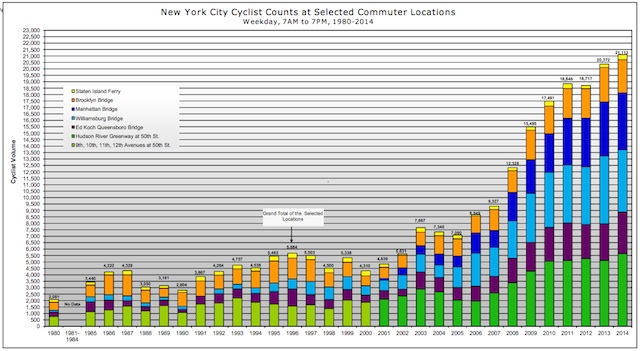 Streetsblog noted last week that a lower cyclist count would not have come as a surprise, since the city did not expand its network of bike lanes as aggressively as it has in years past.

In addition to counts becoming increasingly thorough over the past few years, the DOT also has some notes on past collections, enumerated below:

5. The Hudson River Greenway and Manhattan Bridge path opened to cycling in 2001

6. For years prior to availability of the Hudson River Greenway, data for 9th, 10th, 11th and 12th avenues are shown as a proxy

7. 9th through 12th Avenues is removed from the count from 2001 forward when the Hudson River Greenway enters the count

8. The value for 2012 is the average of 10 counts taken between May and October

9. Counts in 2014 include data collected by automated counters

Of course, a major shortcoming in the data is that it only reveals cycling activity within the center of the city. Last year, DOT Commissioner Polly Trottenberg noted at New York Cycle Club event that it's essential for DOT to develop better city-wide metrics, considering the rapidly expanding infrastructure in the outer-boroughs.