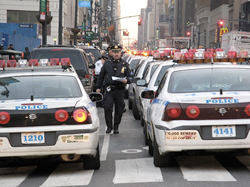 The Daily News is throwing out a bunch of numbers today now that the crime stats for the first half of the year are in. What do they show? Crime is up on some areas, down in others, and overall about the same as last year. Here are some of the main points:

So what does this mean with regards to the Bad Old Days? Last week, Police Commissioner Raymond Kelly ordered more cops to work the dangerous hours between 10 p.m. and 6 a.m. in the most dangerous precincts, but they're still struggling with fewer cops. City Councilman Peter Vallone Jr. said crime is up because "the blue line was stretched too thin." Others are blaming everything from the weather to lazy community watchdogs to kids these days. Lawrence McClean, district manager for Community Board 13, said, "You can't always put it on the police."

Cops remain optimistic about the numbers. Bronx Borough Commander Carlos Gomez said, "Crime has gone down for 17 years. Everything we've thrown at it has worked." But he also said they can't do it alone. "I say this at every meeting. We need the public's help and support. We urge them to report any criminal activity—especially guns and drugs."