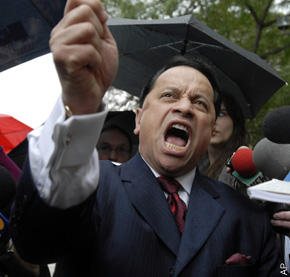 Whoa: NY1 reports that Senate Majority Leader Pedro Espada Jr. is conceding the 33rd District State Senate seat to Gustavo Rivera! Espada, who, in spite of his residency questions and alleged looting of $14 million, not to mention coup maneuvering, was still considered a favorite.

NY1's Dean Meminger said that Espada appeared at his party and said that based on numbers he received, he lost. Meminger even said that reporters didn't realize it was a concession speech, so Meminger asked him point blank if he lost, which Espada confirmed. Meminger added, "He seemed a bit upset, a bit sad...he started to raise his voice, but then calmed down."

With 30% of precincts reporting, Tea Party wild card Carl Paladino is beating Rick Lazio, who is the Republican party-picked candidate, 68% to 31% in the Republican gubernatorial primary. WNYC's Azi Paybarah Tweeted, "reporter tells me 'i'm going to the lazio funeral'"

The Democratic Attorney General race has 31% of precincts reporting, and Kathleen Rice is leading with almost 34%, followed by Eric Schneiderman (25%), Sean Coffey (21%), Richard Brodsky (12%) and Eric Dinallo (7%). It's suggested that the NYC numbers are slow to trickle.

Michael Grimm—not the "paisan"—was named the winner of the REpublican Congressional primary in Staten Island. In other House primary races, Democratic incumbent Carolyn Maloney is leading Reshma Saujani 83% to 17% with 17% of precincts reporting while Charles Rangel, the longtime Harlem Democrat House member, is leading with 48% (19% of precincts reporting), Adam Clayton Powell IV is second, with 24%. And in the race for the Democratic nod for Queens Assembly seat, former State Senator Hiram Monserrate conceded to Francisco Moya.

Update, 11 p.m.: The Associated Press called the Republican gubernatorial race for Paladino. However, Liz Benjamin pointed out that the Long Island precincts haven't reported yet, and that's Lazio's home turf. Still, she said, the fact that the AP was confident enough to call it for Paladino was big (earlier in the evening, when NY GOP chairman Ed Cox was at Lazio's headquarters, Cox was hyping up Paladino).

Update, 11:07 p.m.: NY1 calls Paladino for the Republican gubernatorial primary, and the NY Times appears to as well, if we are to count their highlighting of Paladino's name.

Also, in the Democratic AG primary, with 45% of precincts reporting, Rice has 32% and Schneiderman has 30%.

Update, 11:12 p.m.: Paladino, speaking to the crowd at his headquarters (one of his own buildings!), "If there's anything we learned, it's that New Yorkers are mad as hell. And we're not gonna take it anymore. The people have spoken and I'm here to thank you for choosing me as the Republican candidate for the governor of New York." He tells the people in the republican party who opposed him, "You're welcome to join the people's crusade." He also goes on to bash Andrew Cuomo—his legacy, slams his connection with the Working Families Party, and his liberal "pro-tax" views. He namechecks Staten Island and says he'll clean up the "cess pool" that is Albany. Paladino also challenges Cuomo to a series of debates.