On Sunday, a four-year-old boy was killed while in a playground in the Bronx's Forest Houses. A gunfight broke out at the neighboring basketball court, and little Lloyd Morgan was shot in the head. After desperate and furious pleas to find the shooter and for police to crack down on gun-wielding individuals, police arrested 17-year-old Rondell Pinkerton and charged him with murder as well as criminal possession of a weapon. 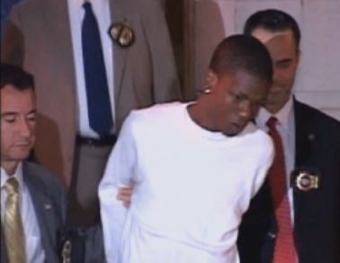 Police Commissioner said that Pinkerton confessed to the shooting and said he was acting in self-defense. There were over 100 people at the basketball court for the game when gunfire erupted around 9:30 p.m. The game was organized as the “First Annual Ghetto Angels Basketball Tournament" and intended as a memorial for a 15-year-old girl who was stabbed to death one year ago—as it happens, one of the men shot, Courtney Kelly, 27, is the stabbing victim's brother. Kelly was charged with criminal possession of a weapon.

According to the Post, "Forest Houses residents said they believe that some of the gunmen came from the nearby McKinley Houses, where thugs have been engaged in a rivalry with punks from the Forest Houses."

Lloyd's grieving family is preparing to bury the boy. His cousin told WCBS 2, "He wanted to be a basketball player someday and I just feel like, he probably could’ve been the next basketball player. But somebody shot him and he will never get that chance."

#arrest
#bronx
#crime
#fatal shooting
#gun violence
#killing
#lloyd morgan
#self-defense
Do you know the scoop? Comment below or Send us a Tip