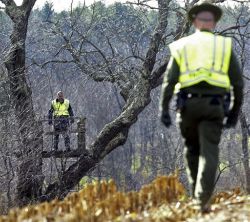 The second day of hunting season claimed one more life than anyone would have hoped for when a toddler was accidentally shot and killed inside her grandmother's trailer in Swan Lake. Edward Taibi of Howard Beach was arrested on charges of second-degree manslaughter after a stray bullet from his .300 Magnum rifle went through the trailer and struck sixteen-month-old Charly Skala in the chest.

Taibi was hunting on a friend's property in Swan Lake, just south of the Catskills, when he climbed down from his tree stand in order to take a follow-up shot at a deer that he had already wounded. He was immediately devastated upon learning of the accident, made even worse by the fact that he had lost a daughter of his own in recent years. His girlfriend Evelyn Lopez told WCBS, "He lost a 12-year-old daughter to cancer two years ago and kids are his life."

Police say Taibi was breaking the law by hunting too close to the trailer where Skala's family was watching football when the bullet came through its wall. It is illegal to discharge a firearm or bow within 500 feet of an occupied residence or business unless the hunter owns or leases the property, or has the owner’s consent. "You have to know what's on the other side of your target and in this case, this gentleman didn't take that safety precaution," said Lt. Pierce Gallagher of the New York State Police.

Charly Skala's grandmother told the Post, "The bottom line is, a hunter shot through my house."