The police are hunting for six individuals involved in a brutal murder that took place on a Bronx sidewalk: 15-year-old Lesandro "Junior" Guzman-Feliz was slashed with weapons after being yanked out of a bodega on Wednesday night. He died after running to a hospital a couple blocks away. 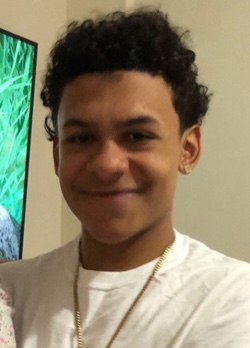 Extremely graphic videos show the murder outside the Cruz and Chiky Grocery, at East 183th Street and Bathgate Avenue, as well as Guzman-Feliz, covered in blood (warning: graphic video), dying on a sidewalk.

According to the NYPD, the attack occurred before 11:40 p.m. on June 20, when officers responded to a 911 call about an assault in progress in front of 526 East 183 Street. Police say they were told that Guzman-Feliz "was involved in a dispute with a group of males in front of the location, prior to being stabbed in the neck." Then officers learned that the suspects fled while Guzman-Feliz ran to St. Barnabas Hospital down the street.

The Post reports, "A bleeding-to-death Guzman-Feliz, who police said was stabbed multiple times, including what appeared to be a huge gash in the neck, was left screaming on the corner with his hands raised before running across the street. In another video of the 11:40 p.m. incident, taken from out a window several stories above the violent scene, bystanders can be heard screaming, 'Oh, s-t!' and 'Stop!'"

Surveillance footage of the individuals involved in the killing released by the police shows at least one person holding a machete.

The authorities also released images of six people wanted for questioning, plus images of two cars they were seen entering.

Guzman-Feliz's sister, Genesis Collado-Feliz, told the Post that he was "a good student" and "a good kid." She said, "He tried to run into the store because he thought he’d be safe. They dragged him from the store like a dog. He is not a criminal."

Family friend Cathy Jimenez told the Daily News, "He was just a 15-year-old boy who hadn't started living. These were grown gang members."

NYPD Chief of Detectives Dermot Shea Tweeted that Guzman-Feliz had hoped to be a police detective:

In the Bronx on 6/20, 15-yr-old Junior Guzman-Feliz was fatally stabbed by the men in the photo (on right). He was never going to give up on his dream of being an NYPD detective & WE’LL NEVER GIVE UP ON HIM. Help us get #JusticeForJunior You can anonymously call 800-577-TIPS. pic.twitter.com/0gVAMfmC7f

A private investigator, Manuel Gomez, told PIX 11 that he also believed that gang members were behind the killing, "They're terrorizing the South Bronx... They are known for killing people with kitchen knives and machetes, that is their signature."

The person who uploaded the sidewalk video to YouTube included a caption critical of the NYPD: "A 15 year old teen was stabbed multiple times in the Bronx, he ran towards the hospital and collapsed within feet of St. Barnabas Hospital, but was still alive, however, officers from the 46Pct was just standing around and did not commence CPR or try to pick the kid up and rush" him inside.

Rap star Cardi B also questioned whether the NYPD was attentive enough:

#justiceforjunior 🇩🇴R.I.P. .These Bronx streets are ruthless .What piss me off the most is that these BX cops be harassing the shit outta people then they see a boy bleeding to death and ask what happen ?“uuuummmmmmmm😤😤😤 How bout you call the ambulance like ya be calling for back up when ya see nikkas smoking in front of a building !!!!! People be like”call the police!” Call the police!!” But for what the operators be asking you questions for like 4 minutes on the phone with an attitude and the cops come maaa lateeee.

A GoFundMe has been set up to help Guzman-Feliz's family with funeral and other expenses.

#bronx
#Lesandro Guzman-Feliz
#machete
#murder
#slashing
Do you know the scoop? Comment below or Send us a Tip