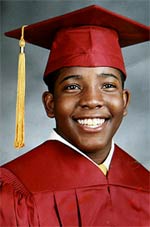 A teenager walking home from a party was fatally shot near West 127th Street and Adam Clayton Powell Jr. Boulevard around 2:30 a.m. yesterday morning. Nathan Allsbrook was shot in the shoulder, and the bullet traveled into his heart.

Police suspect Allsbrook was was hit by a stray bullet. The NY Times says the shell casing "was found a substantial distance" from where Allsbrook had been standing and the Daily News suggests the shot was fired "likely by someone goofing around with a gun." No arrests have been made yet.

Allsbrook is the third teen to be killed in four days--a 15-year-old was fatally stabbed in Queens on Wednesday and a 17-year-old was shot in Brooklyn on Saturday--and his father lamented to WABC 7, "It's just crazy, kids killing kids. I don't get it. I don't get it." He was a student at Richard High School, a Catholic school, regularly attended church and loved sports, especially basketball. His older brother told the Times, "He used to always pray a lot. He used to always tell me to watch out for haters.”