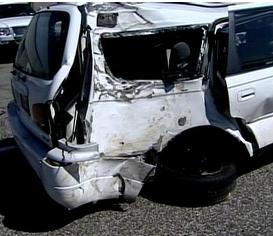 A 15-year-old Queens resident stole his father's minivan and took his friends out for a 3 a.m. drive, in what cops say could have been his first time ever behind the wheel. Police say he was speeding when he lost control, hit a light pole and then a tree in Great Neck. Two 14-year-old girls sitting in the back were ejected from the car. It appears that neither of the girls were wearing seat belts.

After getting a call from a passing motorist, Newsday reports the police found the girls "lying on the road with head and leg trauma" and two boys, ages 15 and 17, "on the curb, conscious but incoherent." The driver was "staggering around, dazed and incoherent."

The five are friends from Hebrew school. The driver will be charged with reckless assault and reckless endangerment as a juvenile and will be headed to Family Court. The NY State DMV states, "You cannot drive in NYS if you are under the age of 16."

#great neck
#joy ride
#queens
#seatbelts
#underage
Do you know the scoop? Comment below or Send us a Tip