14,000 Uber, Lyft Drivers Come Out In Support Of Unionizing

Nearly 14,000 drivers working for Uber, Lyft, and other ride-share app companies have signed union cards, a major show of support in the uphill battle for recognition and leverage as employees. Drivers rallied outside the Taxi and Limousine Commission office in Long Island City yesterday, calling for the agency to schedule a union election. The TLC says that's not its role.

"While the TLC has no role whatsoever in unionization, we have long valued the importance of driver protections in our rulemaking and regulatory processes," TLC Commissioner Meera Joshi said in a statement.

Uber and Lyft drivers are treated by their employers as independent contractors, meaning the New York drivers' cards pledging support for joining the Amalgamated Transit Union Local 1181 are somewhat, though not entirely, symbolic. The National Labor Relations Board is the federal agency that formally recognizes unions and mediates labor disputes, and it does not recognize independent contractors as deserving of the same protections as employees.

In the last year, New York Uber drivers have protested fare cuts, and demanded an option for passengers to tip.

Labor lawyer Ben Dictor, a partner at the firm Eisner & Associates, explained in an email that while independent contractors lack formal bargaining rights, "becoming a member can give an independent contractor access to benefits and a stronger, collective voice within their industry." He continued:

One could see how this could be particularly useful from an advocacy and industry standards perspective for workers who, like cab drivers, work alone for significant parts of their workday. Joining a union is one way to pool economic and political power to push the industry forward.

Drivers working for app startups around the country are fighting for formal recognition as employees, in court and through local legislation, with mixed results. In Seattle, lawmakers passed an ordinance in December entitling Uber and Lyft drivers to union representation.

In April, Uber settled litigation with drivers in California and Massachusetts, with the terms denying the drivers employee status and awarding them $100 million. However, a federal judge overturned the settlement last month, calling the $100 million inadequate, and concluding that "a small portion of the $100 million amount reflects only 0.1 percent of the potential full verdict value of the case." A group called the New York Taxi Workers Alliance filed a similar class-action lawsuit on behalf of 5,000 New York Uber drivers late this spring. 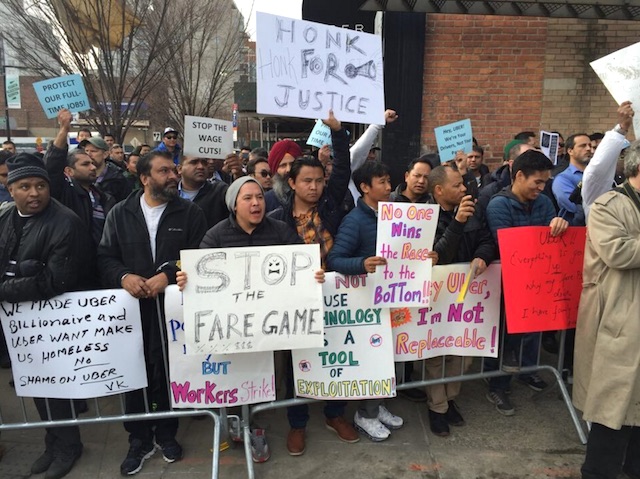 And in August, the NLRB decided in a case out of Columbia University that graduate students working as adjunct professors are employees with a right to unionize.

Dictor, the labor lawyer, said that the many cases involving independent contractors seeking recognition as employees around the country show that the law has not kept up with the country's shift towards a gig economy.

"It's a case-by-case analysis," he said, noting that classification challenges can be brought at before the NLRB as well as the IRS and a litany of other federal agencies. "It's not necessarily the most efficient way of addressing the overall problem, which is that you have a more and more dispersed labor force."

The Amalgamated union drive in New York is one of several competing labor organizing efforts focused on ride-share drivers in the city. In May, Uber came to an agreement with a group called the Independent Drivers Guild, an offshoot of the International Association of Machinists, to listen to representatives of the app's 35,000 New York City drivers. The guild is supposed to meet with management on a weekly basis for the next five years, and offer drivers discounted legal services, life and supplemental disability insurance, roadside assistance, and other resources.

The guild does not have the ability to formally bargain, and has promised not to unionize drivers in the absence of employee status, but a rep told Crain's that status could change.

"Should drivers be classified as employees at any time, the Machinists can help them unionize, building on the strength of the Guild," said guild founder and Machinists attorney James Conigliaro, Jr. "As the only union to successfully organize and unionize New York’s black-car drivers in the last 20 years—and the only union to negotiate key protections and a seat at the table with Uber—we are in the best position to win real change."

Uber and Lyft spokespeople told the Daily News that the latest petitions lack employer names in the required field, and that drivers are welcome to switch between apps.