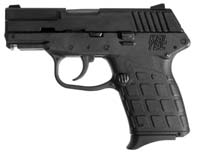 School security at Staten Island's Dreyfus Intermediate School was on the alert for a possible water balloon prank, but they ended up finding a student carrying a 9mm gun and a magazine clip. Darren Rivera, 14, was charged as an adult with gun possession.

Rivera had run past a security checkpoint yesterday, prompting security and police officers to look for him. The boy, who apparently threatened to kill another student during a fight last week, claimed he found the gun on the way to school. Prosecutors asked for Rivera's bail to be set at $100,000, but his public defender said, " Allegedly, the gun was found in one pocket, and the clip was found in the other. This gun wasn't ready to be fired," and bail was set at $50,000.

Rivera is being held in the juvenile detention section of Rikers; he faces up to seven years in prison if convicted. Parents and students had no idea that a student was found with a gun. A student reasoned to NY1, "Nobody told us about somebody finding a gun, 'cause if they would of told us that, everybody probably would of panicked."

As the Dreyfus itself, 15-year-old Jasmine Palermo said to the Advance, "I thought it was a good school. But lately I've heard mad stuff going on around there."