Authorities in Newark are continuing to investigate the fatal shootings of two Newark teens, a boy and a girl, on Christmas Day. The gunfire left another teen boy injured, and now it seems that one of the boys was the intended target. And the girl was killed by a stray bullet while she was taking out the garbage.

Abdul "Scooter" Frazier, 14, and Kasson Mormon, 15, were on the front porch of a house on Schley Street, in Newark's South Ward around 10 p.m. when the violence broke out. According to the Star-Ledger, "Authorities released no motive for the attack, but two law enforcement officials with knowledge of the investigation said it appeared one of the boys had been targeted... Abdul lived on the home’s first floor, a relative said. Zainee [Hailey], who lived on the third floor, simply stumbled into the gunfire as she and her 7-year-old brother carried trash to the street that night, police said. The brother was not injured."

Kasson and Zainee were killed and Abdul was shot in the neck. He is in critical condition, but apparently was able to nod to relatives after surgery. A friend told the Star-Ledger that "Abdul had recently become a father, and Kasson, the slain 15-year-old, was about to become a father as well," while a relative of Abdul's said he had just been opening the door for Kasson.

As for Zainee, she had just received a Kindle, clothes and other Christmas gifts. Her grandfather said, "She wanted to read, and plus that was her first piece of electronics. Her main focus, we were always talking about her going to college." 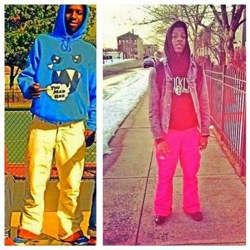 Some neighbors think the shooting was over red Jeep Cherokee, that was stolen "after its owner left the keys in the ignition." The Daily News reports, "Authorities could not immediately confirm the account, but investigators towed a Jeep Cherokee from the scene soon after the deadly shooting."

The shootings took place in an area that has grown increasingly violent. One resident, who lives with her daughter and grandchildren, said, "These days, bullets don’t have names on them."

With Zainee's and Kasson's deaths, Newark has had 102 murders in 2013. The last time the murder total was over 100 was in 2006. The shootings occurred near Irvington, where three fatal shootings occurred earlier on Christmas Day.

#fatal shootings
#gun violence
#kasson mormon
#newark
#nj
#zainee hailey
Do you know the scoop? Comment below or Send us a Tip