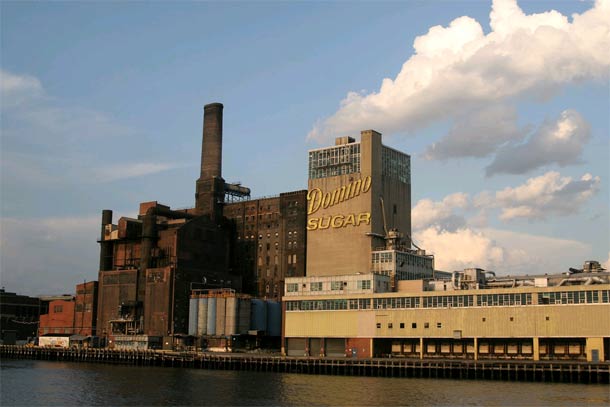 The developer who plans to transform Brooklyn waterfront where the Domino Sugar factory stands unveiled the billion-dollar plans yesterday. According to the NY Sun, there will be 2,200 housing units, 120,000 square feet of retail space, and 100,000 square feet of community space. Thirty percent of the housing will be affordable: 530 will be rentals (100 units for families making $21,000; 330 for families making up to $40,000; "100 for seniors who make up to 50% of the median income for the area") while 130 units will be for sale to "families making up to $90,000 annually."

Community Preservation Corporation Resources (a pointed company name if there ever was one) president Michael Lappin said this would be "the first time in several generations that this part of the waterfront will be open to the public," what with water taxi access and a 40-foot-wide waterfront esplanade between South Fifth and Grand Ferry Park.

The Processing House will remain, but CPC Resources did not mention any other buildings that would be preserved. Efforts are under way to save the Domino Sugar sign, but the sign's building will likely be demolished. Though many groups would like more buildings preserved and more affordable housing, CPC Resources seems to have won over many; the advocacy group El Puente's Luis Acosta told AM New York, "They've really gone to every single community group and sat down. They've been an exception to the rule of developers who take a top-down approach and essentially tell the community what's going to happen after it's been decided."

Curbed has photographs from the press conference.