12-Year-Old Died Trying to Save Relatives During Fire 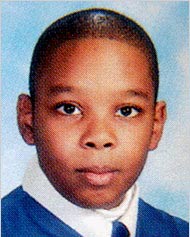 Yesterday morning, a fire in a Flatbush home on East 19th Street claimed the lives of three people, a 76-year-old, 50-year-old, and a 12-year-old, and now authorities say that the 12-year-old, Bengino Dodard, died while trying to help others.

Dodard and his 15-year-old cousin had been on the third floor when a fire broke out, apparently from faulty wiring. He called 911 from the second floor, but then returned to the third floor to get his grandmother Marie Vixama and aunt Chrismane Vixama. But the fire spread quickly, and Dodard, grandmother and aunt perished in the flames. Relatives say that the 12-year-old, known as Benji, was the only one in the house who spoke English well.

Cousin Marctyson Vixama managed to escape through an attic window and with the help of a good Samaritan who ran up a metal staircase outside the Victorian home. A witness told the Post the Samaritan grabbed a gutter and "told the kid to come down. The boy moved to the edge, and the man grabbed his legs and helped him down. He coaxed the kid to come down into his arms."

Around 14 family members lived in the house; the NY Times reports "uncles, aunts, a grandparent and grandchildren shared the second floor and the attic." The house is owned by Dodard's parents, Nanouse and Bernard Dodard, who also worked as auxiliary police officers at the 70th precinct. Unfortunately, a fire department source told the Daily News, "nothing was up to code" in the home: "The apartment had been sliced into rooms, with practically every room being rented out. It was a regular hotel." The Dodards were served with a number of violations from the Buildings Department, including, per the Times, "work without a permit, occupancy on the cellar level of the home and storing six unregistered vehicles in the backyard."

Earlier this year, a Bronx fire claimed the lives of nine children and one adult; at least 22 people, an extended family of Mali immigrants, were living in a four-story home.