11-Year-Old Shot While Answering the Door 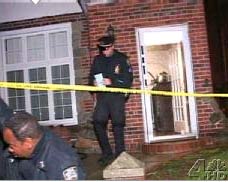 What kind of world do we live in when an 11-year-old boy gets shot in the chest while answering the front door? Tyshaun Falconer is in critical condition after a gunman fired at him on 224th Street in Springfield Gardens, Queens.

The dog barked, indicating someone was at the door, around 8:30PM and Tyshaun answered it (his parents were also at home at the time). The gunman had asked to see Tyshaun's 16-year-old brother Tony, but, according to the child's grandmother Clare Williams, Tyshaun said, "Tony's not home right now." The gunman then shot Tyshaun and fled. Williams said, "Isn't that coldblooded? He's a little boy. He doesn't mess with anyone."

Police questioned the brother and Williams said, "I hope he knows who did this. There's some kind of feud going on." Neighbors are shocked at the violence, with one woman who babysat Tyshaun and who works with his mother telling the Post, "Tyshawn was always a happy-go-lucky little boy, so happy and loving. I just love Tyshawn. I just hope to God he pulls through this and can say who did this to him." And his father, Tony Falconer Sr., said doctors say his son will be fine, "It definitely wasn't his time."

#child shot
#crime
#queens
#shooting
#Springfield Gardens
#tyshaun falconer
Do you know the scoop? Comment below or Send us a Tip