1.1 Million Students Back in Classrooms 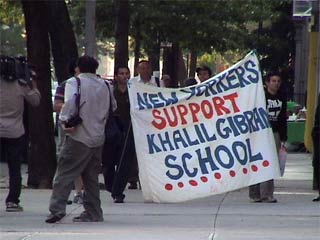 Mayor Bloomberg, Schools Chancellor Klein, City Council Speaker Quinn, and other city and school officials celebrated the first day of school yesterday with an appearance at P.S. 53 in the Bronx. P.S. 53 was selected because it will be receiving almost a half million dollars more in funding, due to Bloomberg's "fair student funding reforms."

The Mayor happily said, "We are becoming the poster child for what you should do with a school system that's big and diverse." He also crowed that there were more certified teachers in the school system than ever - there were 6,000 new hires over the summer, resulting in 1,300 more teachers (after retirement and attrition) than last year.

The NY Times noted that the appearance of teachers union head Randi Weingarten and principals' union president Edward Logan, not to mention Governor Spitzer, at the P.S. 53's ceremony was a "carefully choreographed display of unity for one day at least among leaders who have sparred intensely in the recent past." Spitzer said, "This is a partnership that matters to everybody in the state of New York." Yeah, that and a billion dollars needs to be sent back to NYC schools.

While most schools' first days had excitement and apprehension on both children's and parents' parts, one school had a little more controversy: The Khalil Gibran International Academy, the Arabic-themed public school in Brooklyn, was greeted with lots of security and supporters. However, there were opponent, though in another borough: The Politicker has video of Catholic League for Religious and Civil Rights president Bill Donohue protesting the KGIA school in front of City Hall.