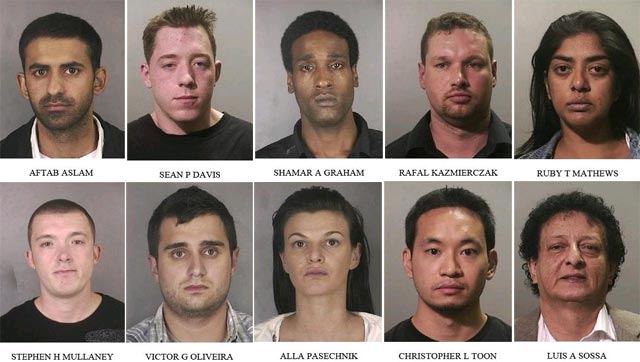 Nassau County Executive Thomas Suozzi made good on his promise to publicize people arrested for driving while intoxicated over the Memorial Day weekend. Yesterday, he released the names of 109 arrested--81 were for DWI while 28 were arrested for driving while impaired, which is a lesser charge. The mugshots of the 81 DWI arrestees were also released.

Suozzi said, "If the fear of killing somebody or the fear of ruining your life by getting arrested or injuring yourself is not enough, we're going to try and add other techniques, like embarrassing you." Newsday reports the most of the arrestees were in their 20s, "though the youngest arrestee was 17, and the oldest, 74" and "at least seven...were repeater offenders." And two dangerous incidents: One was driving westbound in eastbound lanes on Sunrise Highway and another was "driving drunk with her children aboard."

And the mugshots at top are of 10 NYC arrestees--at least the ones whose licenses are in NYC. Of course, they are innocent until proven guilty.

Update: Here's another Newsday article that discusses the legal debate about this initiative. Hofstra University ethicist Professor Arthur Dobrin said, "Is it ethical to shame a person before they have been deemed guilty? Whatever can be done should be in this fight [against drunken driving], provided it is both legal and ethical. Here it may very well cross the line of the latter."

A NY Times spokesperson told Newsday that it "publishes the names of people accused of crimes only if the crime itself or the prominence of the person accused makes it news in our judgment. In this case, we don't plan to publish a list of names." Newsday decided not to publish the names and pictures in print, but did run all the information and photos online.

#crime
#drunk driving
#dwi
#nassau county
#Thomas Suozzi
Do you know the scoop? Comment below or Send us a Tip
A new Gothamist is coming! We’ve moved comments over to our beta site. Click here to join the conversation and get a preview of our new website.