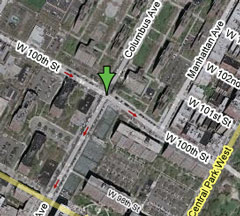 Two robbers targeted the apartment of Juanita Pena, a 100-year-old wheelchair-bound woman, in the Frederick Douglass Houses at 100th Street and Columbus Avenue on the Upper West Side yesterday morning. The two men knocked on the door and pushed in when Pena's home health care worker went to answer. They tied her up and put her in a bathroom; when Pena's 71-year-old son came by, they also tied him up with duct tape and put him in the bathroom.

The robbers left without taking anything, and the Daily News says that Pena didn't even realize she had been robbed, because the robbers left her alone. Still, a neighbor says, "They are terrified from what happened. They're afraid to open the door."

And another horrible incident: The Post reports a 75-year-old man walking his granddaughters home from school was splashed with acid on Broadway and 218th Street in Manhattan. Some teens threw a plastic bottle full of acid at him, which exploded and hit his face and arms. Is acid the new dumb thing? A few weeks ago, some high school students were injured when a car ran over a bottle of Drano, which was deliberately thrown on the street.